Many Americans Disapprove of President Trump. Here's What They Think of His Policies

President Trump isn’t just down in the polls personally, so are some of his policies.

After six months in office, Trump’s approval rating is just 37% in the Gallup daily poll, and he’s hit record lows in other surveys. At the same time, a number of his policies have also polled poorly, while a handful have scored well in surveys.

Here’s a quick look at where Trump’s policies stand in the polls, in order from most to least popular.

In January, Trump introduced a a travel ban on visitors from six predominantly Muslim countries. The executive order faced months of legal and political challenges, and unclear public opinion: conflicting polls variously reported both support and disapproval of the measure. But a July POLITICO/Morning Consult poll reported definitively that 60% of respondents supported the revised version of the policy.

In August, Trump announced his support for the RAISE Act, a longshot Senate bill that would change the immigration system to more heavily consider factors like English proficiency and college degrees. In a POLITICO/Morning Consult poll, 60% of respondents favored such a system.

The RAISE Act would also reduce legal immigration by half over the next decade. The POLITICO/Morning Consult survey taken after Trump announced his support for the bill found that 48% of voters back the reduction in legal immigrants, while 39% opposed it.

Repealing Obamacare Without a Replacement: 50% Against

In late June, Trump tweeted that Senate Republicans should “immediately REPEAL” Obamacare, and then pass a replacement bill “at a later date.” But that move, which would eventually be tested in the Senate’s failed attempt to pass a “skinny” repeal bill, is unpopular. Fifty percent of voters in a POLITICO/Morning Consult poll said the opposed a repeal without replacement, while just 36% expressed support.

Though he pledged not to touch Medicaid on the campaign trail, Trump supported health care bills in Congress that would have cut the insurance program for lower-income Americans dramatically. A POLITICO/Morning Consult poll in June found that 53% of voters objected to the reductions in Medicaid. Only 27% supported the cuts.

Leaving the Paris Climate Deal: 62% Against

In May, Trump announced that the United States would withdraw from the Paris agreement, fulfilling a campaign promise to divert funding away from climate change. Sixty-two percent of voters in a Quinnipiac poll said they disapproved of the President’s decision to withdraw from the accord. Only 32% backed the idea.

Building the Border Wall: 64% Against

Trump’s call for a wall along the Mexican border was one of his major campaign promises, and his proposed 2018 budget included a request for $1.6 billion to begin construction. But a May survey by Quinnipiac found that 64% of voters oppose building the wall—up from 55% who opposed it in November. Only 33% supported the idea. 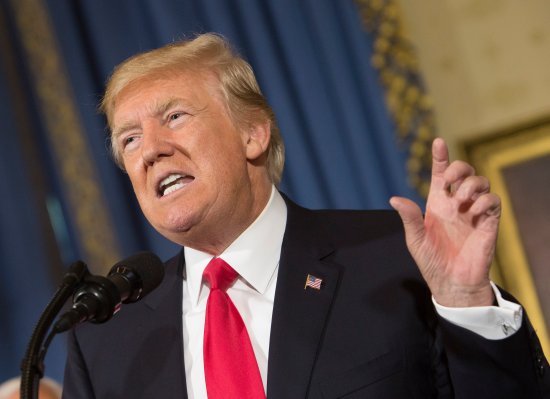