British police are hunting for a jogger who was caught on CCTV pushing a woman off the pavement and into the path of a bus on the morning of May 5.

The grainy footage shows a man running over West London’s Putney Bridge. He passes one male pedestrian without incident then appears to shove a female pedestrian into the road. The 33-year-old woman miraculously avoided being run over by the oncoming vehicle by contorting her body as the bus swerved out of her way.

“The victim was put in extreme danger when she was knocked into the road. It was only due to the superb quick reactions of the bus driver that she was not hit by the vehicle,” Sgt. Mat Knowles, the investigating officer, told Reuters.

The woman, who has not been identified, obtained minor injuries and was aided at the scene by passengers who were on the bus at the time, Reuters reports. She said she attempted to speak to the jogger but “he did not acknowledge her”.

London’s Metropolitan Police released the footage in an attempt to identify the man and have urged anyone with any information about the incident or the jogger to come forward. 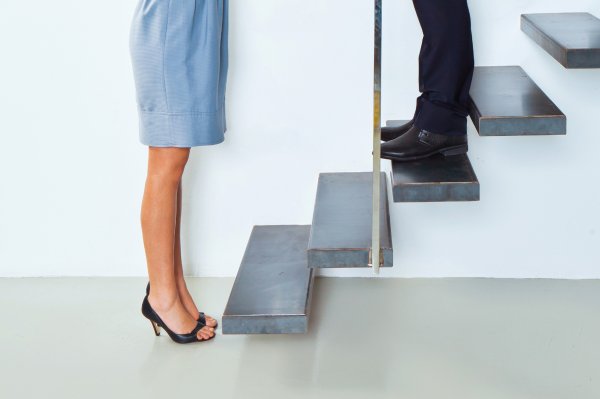 British Women Have Had Enough of Being Paid Less Than Men
Next Up: Editor's Pick