Mike Pence on Health Care: 'This Ain't Over by a Long Shot'

Vice President Mike Pence reaffirmed his party’s intentions to repeal and replace Obamacare Friday night, telling a group of conservative students in Washington, D.C. that the endeavor “ain’t over by a long shot.”

“My fellow conservatives, let me be clear. This ain’t over. This ain’t over by a long shot,” Pence told attendees of the National Conservative Student Conference, hosted by the Young America Foundation, according to CNN. “And President Trump and I are absolutely committed to keep our promise to the American people. We were not elected to save Obamacare — we were elected to repeal and replace it.”

More than a week prior to Pence’s speech, the Republican-led effort to repeal the health care policy collapsed in the Senate after three GOP lawmakers — Lisa Murkowski of Alaska, Susan Collins of Maine and John McCain of Arizona — voted against their party’s proposal.

The Senate has since left the chamber for its August recess, but Pence maintained that the legislative body was merely one vote away from repealing the Affordable Care Act.

“Last week it was clear that the Senate wasn’t quite ready to keep that promise to the American people when they fell one vote short of moving forward on a bill to repeal and replace this disastrous policy,” Pence said. 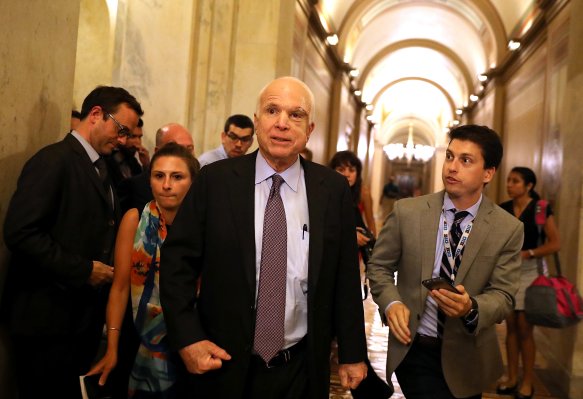 Watch the Moment John McCain Voted Against the Obamacare 'Skinny Repeal'
Next Up: Editor's Pick