How Will Animals React to the Solar Eclipse? Depends on How Smart They Are

Crickets will chirp, cows will march back to their barns and swarms of once-busy honeybees will fly hurriedly home to their hives when a total solar eclipse sweeps across the U.S. next week.

The sudden darkness that comes when the moon momentarily blocks the entire sun on Aug. 21 will cause some animals to experience a range of reactions, including confusion, fright and excitement, experts say. While animals like insects and bats behave as if nighttime has simply come early, other more intelligent animals — chimpanzees, dolphins and llamas — appear to stop and stare at the sky, showing signs of understanding a celestial phenomenon is occurring, or at least that something is off.

“The smarter animals freak out,” said Dr. Douglas Duncan, the director of the Fiske Planetarium at the University of Colorado. “I think it’s likely that really smart animals react differently.”

Duncan said he saw a group of dolphins and whales displaying strange behavior during a total solar eclipse he witnessed from a boat in the Galápagos Islands in February 1998. About five minutes before totality, as the sky darkened, about 20 of the marine mammals surfaced, arching in and out of the water in complete silence.

“It was quite fascinating and eerie,” Duncan said. “It was like, ‘Whoa! Look at that, everybody!’”

Duncan said there were no llamas around him or his group of about 100 observers during the partial phase of the eclipse. But when totality hit, all of a sudden about 15 llamas appeared to gaze at the total eclipse with their human companions.

“For the life of me, I can’t tell you where they came from,” Duncan said. “When the total eclipse ended, the llamas kind of got themselves into a rough line and they marched away.”

Llamas are intelligent and observant animals, according to Jane Hamilton-Merritt, president of the Greater Appalachian Llama and Alpaca Association in Connecticut. The animals also have sharp hearing and good memory, and their large eyes allow them to see almost 360 degrees. “They just seem to know things way in advance of us, and they’re also very good at sensing if people are afraid,” Hamilton-Merritt said. “They have a very good sense of their surroundings. They’re extremely aware of their environment.”

A Belgrade zookeeper holds a young chimpanzee Olgica wearing solar viewing glasses while they look up into the sky to watch the solar eclipse as it passes over the Yugoslav capital.
Reuters

The behavior change in animals during an eclipse has sparked the curiosity of scientists for centuries. It prompted primate researchers in Georgia to observe a group of chimpanzees during a 1984 annular solar eclipse, in which a bright ring of light was visible around the silhouette of the moon as it crosses in front of the sun.

The chimps, held in an outdoor compound at the Yerkes National Primate Research Center in Georgia, exhibited signs of confusion, apparently showing they knew the celestial change was abnormal, according to a study published in the American Journal of Primatology in 1986.

When the sunlight started dimming and the temperature began to drop, the animals climbed upward and positioned their faces and bodies toward the sun. “One juvenile stood upright and gestured in the direction of the sun and moon,” the researchers wrote in the study.

When the eclipse passed and sunlight returned, the chimps climbed down. “These data indicate that a solar eclipse, a rare and uncommon environmental event, can influence and modulate the behavior of chimpanzees,” the study said.

READ MORE: Here’s How Everyone in the U.S. Could Witness the Total Solar Eclipse in Person

The behaviors of dolphins, whales, chimpanzees and llamas are starkly different from what’s been observed in less intelligent animals, like bats, sheep and cows — which react to an eclipse the same way they respond to nightfall.

In dozens of recorded instances, cows were seen at totality heading toward their barns, the way they usually would around evening time. When the sunshine returned in under three minutes, the cows reversed course, even sometimes before reaching their barns, and went back to the field.

Totality also moves swarms of honeybees to fly home, according to a study published by the American Academy of Arts and Sciences in 1935. A team of researchers from the Boston Society of Natural History combined dozens of accounts from the public, game wardens and nature experts who witnessed the total solar eclipse in parts of Maine, New Hampshire and Massachusetts in August 1932.

One of the observers, who watched five hives, said: “As it darkened, the flight quickened and at the time of the greatest totality, the air was full of bees — a great roar of wings ensued and the entrances to the hives were blocked with bees trying to get in.” The researchers said the insects’ behavior is mostly based on reflex — a response to rapid changes in light, temperature and humidity.

People use protective glasses on their dog during a partial solar eclipse in Liverpool on March 20, 2015.
PAUL ELLIS—AFP/Getty Images

The study also found most mammals in zoos rarely react to totality, except for Rhesus monkeys. Pet cats also showed no significant changes in behavior, while some dogs expressed excitement or fear. However, experts say the canines were most likely mirroring the reactions from their human companions.

“Doubtless in some instances, the intelligent animals sensed something unusual in the behavior of their masters, while probably others . . . reacted as if a thunderstorm were imminent and became frightened, whimpered or tried to hide away,” the study said.

The total solar eclipse on Aug. 21 will cross America exclusively from coast to coast for the first time in U.S. history. It’s also the first total eclipse of the sun that will be visible from the contiguous U.S. since 1979. About a dozen states are directly in the eclipse’s path of totality, from Oregon to South Carolina. 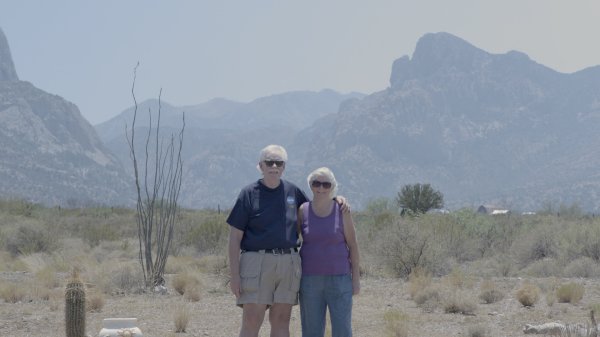 He Met His True Love While Chasing Eclipses. Now They Chase Them Together
Next Up: Editor's Pick