President Trump Goes to War With His Staff

In political television shows and films, it’s the ultimate cliché: a senior aide or Cabinet secretary, standing in a hallowed hall, declares that he or she serves at the pleasure of the President. But in Donald Trump’s Administration, the adage is being rewritten. At one time or another, almost everyone who works in the White House has discovered they are serving at the President’s displeasure.

Amid the Russia investigations and Washington’s legislative morass, Trump has turned his frustrations on some of his most loyal advisers. His stunning parade of attacks on Attorney General Jeff Sessions, whom the President faults for recusing himself from the Russia probe, has drawn much of the attention. But since the hiring of Anthony Scaramucci as White House communications director, Chief of Staff Reince Priebus is increasingly under fire as well.

Scaramucci, whose title doesn’t fully capture his influence with the President, has taken the lead in the hunt to root out the source of leaks in the Trump Administration. That effort has quickly turned into an all-out-assault on Priebus—one seemingly sanctioned from the top.

In a late-Wednesday tweet, Scaramucci speciously accused Priebus of “leaking” his publicly available financial disclosure form. That tweet followed a dinner with the President. Then Scaramucci called into CNN Thursday morning, compared his relationship with Priebus to the Biblical feud between Cain and Abel, and suggested that the chief of staff should answer publicly for his leaks. That call also followed an early-morning chat with Trump.

Priebus been under fire since the start of the Administration. As the nominal top aide in the Trump White House, he’s an easy person to blame when things go awry—especially when Trump refuses to admit that he’s the one at fault. Ivanka Trump and Jared Kushner, arguably the two most influential advisers to the President, have expressed frustration with Priebus’ performance.

But the arrival of Scaramucci has turned up the heat on the beleaguered chief of staff. The bad blood between the two dates back to the beginning of the Administration, when Priebus was among those who sought to keep Scaramucci, a former hedge fund executive from New York, from taking a role in the White House. Ironically, part of the reason Priebus sought to block Scaramucci was due to concerns that he would leak to reporters with whom he has relationships through his role in GOP finance circles.

Sessions and Priebus may be the two most embattled officials, but they are hardly the only ones on the hot seat. Trump has also taken aim at Deputy Attorney General Rod Rosenstein and acting FBI Director Andrew McCabe. He hasn’t taken steps to defend National Security Advisor H.R. McMaster from damaging leaks. And in their effort to squeeze Priebus, Trump and Scaramucci are targeting the chief’s allies inside the White House.

It’s not clear to the aides enduring public scoldings or the people around them whether the President wants them gone, or simply wishes to see them squirm. Some believe the President is flailing for a fix in a dysfunctional West Wing. Others see it as the art of distraction. Still more say Trump’s pure love of political bloodsport is the reason why he is sponsoring the internecine attacks.

Asked about the drama on Thursday, White House press secretary Sarah Huckabee Sanders said: “The President likes that type of competition and encourages it.”

Six months into his administration, Trump has all but stopped listening to some of the veteran Washington hands in his White House. This has been a pattern throughout his time in public life: Trump has a capacity to listen to professionals, but when the going gets tough, he almost always falls back on his penchant for disorder.

But the consequences of Trump’s decision to promote tumult aren’t confined to the realm of palace intrigue. The Joint Chiefs of Staff were left scrambling Wednesday to deal with the fallout of Trump’s hastily announced plan to ban transgender troops, having not been informed ahead of his half-baked pronouncement on Twitter.

What’s clear is that the officials under fire face a stark choice: resign, or power through the insults. In the case of Sessions and Priebus, they appear committed to the latter path. 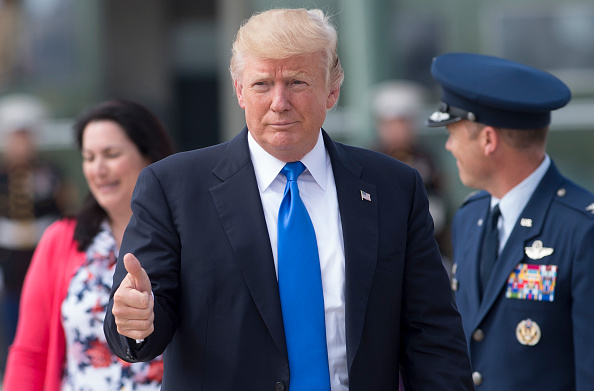 Can You Spell Better Than the Trump White House?
Next Up: Editor's Pick