Former Secretary of the Navy: Donald Trump’s Ban on Transgender Service Is a Threat to America

By barring transgender Americans from “any capacity in the U.S. military” President Donald Trump told thousands of serving trans patriots they are not worthy of defending the country they love for his own cynical politics. With this crass, discriminatory act, he further eroded our democracy and seriously weakened the U.S. military.

He sent the message that ability doesn’t count and that prejudice wins. In this case, as in so many more, he thumbed his nose at something that is basic to who we are as Americans: Anyone who wants to serve and is able to serve should be allowed to serve. And he denigrated those trans individuals who are doing what he never did.

That’s why so many who have served in uniform are so strongly opposed. People like Senator John McCain, former Chairmen of the Joint Chiefs General Martin Dempsey and Admiral Mike Mullen — and twenty-year Navy SEAL veteran Kristin Beck, who had 13 deployments and earned both a Purple Heart and Bronze Star and said it best: “Let’s meet face to face and you tell me I’m not worthy.”

The American principle has always been about what you can do, not who you are.

These were the values behind my efforts as Secretary of the Navy in the Obama Administration to help end the shameful “Don’t Ask, Don’t Tell.” That disgraceful policy required gay Americans who wished to serve to lie, even though who they loved had nothing to do with their ability to serve.

Shortly after DADT was repealed, I met a First Class Petty Officer who was leaving Afghanistan after his third combat tour as a medic with the Marines. He wanted to thank me for helping in its repeal because, he said, after 12 years in the Navy and combat tours in Afghanistan and Iraq, his biggest fear was that he would be kicked out of the service he loved because of who he loved. How wrong is that?

Similarly, I was proud as Secretary to open up all positions, including ground combat and special forces, to women. Securing our nation’s freedom with a volunteer force requires us to attract the best that America has to offer. This is all about readiness. To assure our forces are truly ready, prepared and capable to handle any challenge and to win, the only barrier to service must be simply and solely: Can you do the job?

We know Trump is lying about “tremendous medical costs and disruption” being his motivation. Two studies, one by the military, found health costs would be as little as $2.4 million and, at the very most, $8.4 million. How small is that in our military? In one year, the Department of Defense spent $41 million for Viagra, $48 billion on health care in a $573 billion total budget.

It is sad and ironic that Trump made this announcement on the 69th anniversary of President Truman ending segregation in the U.S. military. Opponents of Truman’s decision argued it would erode unit cohesion, impact readiness and disrupt the effectiveness of our military. They were wrong. They were wrong in the ‘70s when women were admitted to the Service Academies. They were wrong in the ‘90s when women began serving in combat roles as pilots and aboard ships. They’ve used the same arguments every time, and they’ve been wrong every time. It’s clear that Trump’s real purpose is again to distract from a Russia investigation, which appears to be getting very close and very serious. He did it with the Boy Scouts, and now he’s doing it to our bravest, who are serving in our military protecting our country.

Donald Trump has no respect for democratic values or American history. He is a bully who hides behind his tweets, who castigates friends and allies, while praising dictators and providing aid and comfort to our adversaries.

Even his language, suggesting that U.S. military leaders are “his generals,” demonstrates a lack of understanding about military service and about our system of government. The President is the commander in chief, but the generals — and admirals — are not “his,” just as the White House is only on loan from the American people. 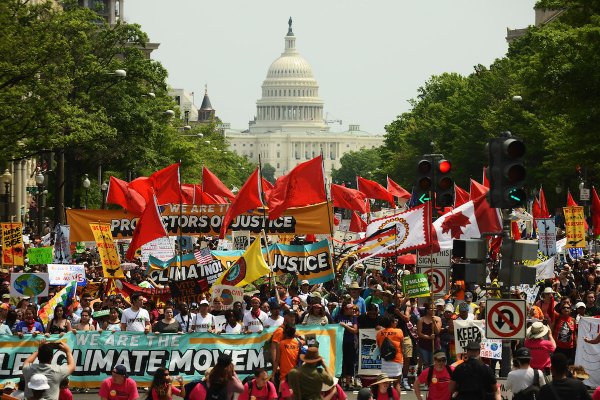 Climate Change Used to Be a Bipartisan Issue. Here's What Changed
Next Up: Editor's Pick