Angelina Jolie has already spoken publicly about her preventive double mastectomy, reconstructive surgery, and ovary removal. Now the actress is opening up about another health condition she’s facing: Bell’s palsy.

In Vanity Fair’s latest cover story, Jolie reveals she developed the form of facial paralysis last year. “Sometimes women in families put themselves last,” she says in the interview, “until it manifests itself in their own health.”

Bell’s palsy occurs when a nerve in the face becomes swollen or inflamed, triggering symptoms like muscle weakness, drooling, a drooping eyelid or corner of the mouth, twitching, or paralysis, which can come on quickly. These symptoms usually affect one side of the face, and typically worsen over 48 hours.

About 40,000 Americans are diagnosed with the condition each year. While it can affect anyone, Bell’s palsy is most common among pregnant women, and people who have the flu, a cold, or diabetes.

It’s not entirely clear what causes the condition, says Dr. David Simpson, director of the neuromuscular division at the Icahn School of Medicine at Mount Sinai in New York City. “In the majority of cases we don’t identify any specific cause of Bell’s palsy, although it’s presumed it may be associated with a viral infection,” he says. To fight the infection, the body produces inflammation, which may be misdirected to the nerve that controls movement of the face.

Health.com: Here’s Why Your Eye Is Twitching–and How to Make It Go Away

Jolie hasn’t revealed whether or not she suffered any infection leading up to her diagnosis with Bell’s palsy. And it’s unlikely that the facial paralysis would be related to her preventive mastectomy or the removal of her ovaries, says Dr. Simpson (who has never treated the actress). However, people who have been diagnosed with cancer or other conditions that weaken the immune system may have a slightly higher risk of Bell’s palsy, he says.

A doctor can usually diagnose Bell’s palsy just by looking at a person, but may decide to do a blood test, MRI, or CT scan to rule out other causes of facial paralysis, like diabetes or tumors. Treatment for Bell’s palsy usually begins with caring for the parts of the face that are paralyzed, especially the eye. In severe cases, a person may not be able to close the eye on the paralyzed side of the face, which could lead to damage to the cornea. Eye drops or ointment can usually help prevent this, as can wearing an eye patch, especially overnight, Dr. Simpson says.

To speed up recovery, doctors typically prescribe a steroid medication like prednisone to limit inflammation of the facial nerve. Antiviral medications like valacyclovir may also be used in combination with a steroid, although there’s less convincing evidence that they help, Dr. Simpson explains. Both types of medication are typically taken for about 7 to 10 days in the early stages of Bell’s palsy.

Most people recover completely in a few weeks to a few months without any real risk of long-term complications. Jolie told Vanity Fair that she has fully healed, and credits her recovery to acupuncture. While she’s not the only person to try alternative therapies for Bell’s palsy, there’s no evidence acupuncture, relaxation, or taking vitamins makes much difference in recovery.

A small proportion of people may not fully recover. If facial weakness continues for longer than six months to a year, surgery may help restore some movement and symmetry to the face, Dr. Simpson says. 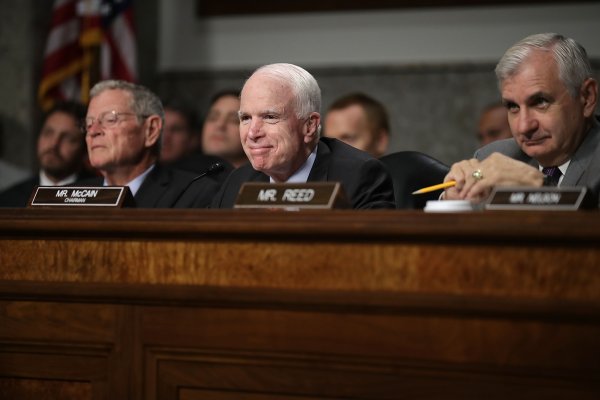 John McCain Had a Craniotomy to Remove a Blood Clot. Here's What That Means
Next Up: Editor's Pick