This Was the Best Blockbuster Summer in Years: Here Are the 6 You Have to See

For years now, we’ve been conditioned by movie studios to get excited about big summer movies. And yet usually by the first week of August, anyone who has been paying attention to those movies—and to their marketing schemes—is usually looking back dolefully at a landscape of carcasses picked over for their entertainment value and then tossed aside for the buzzards. Even the end of a Sergio Leone movie looks prettier.

In the past five years—or even the past dozen—how many big summer movies have lived up to their hype? For every one you might remember with pleasure (Mad Max: Fury Road) there are five or 10 or more that you’ve forgotten, or wish you could forget (Suicide Squad tops my personal list). In between are dozens that you thought were just OK: An X-Men movie here and there, with a soupcon of Star Trek tossed in. Even if we’re able to muster the standard semi-enthusiastic mini-review for our friends right after we’ve seen these movies (“It was fun!”), usually we can’t remember a thing about them two or three weeks later.

But blockbuster history might be kinder to the summer of 2017. The crop this year is a cut above that of any season in recent memory. And while that probably owes more to the luck of the draw than to smarter, better planning on Hollywood’s part, studios may end up learning something from the box-office success of these movies. Or at the very least, they may rethink the wisdom of shriveled old chestnuts like “A woman can’t ‘open’ a movie.”

Will this summer mark the end of the undistinguished, perfunctory, way-too-big superhero movie? Certainly not. But Jon Watts’ Spider-Man: Homecoming, a Marvel franchise reboot many of us didn’t think we needed, at least breathed some fresh air to the genre, largely because it has that rarest of qualities: It doesn’t take itself too seriously. The picture is extravagant in terms of action scenes and special effects, but those aren’t the best things about it. In fact, they only make it more pedestrian. What makes Spider-Man: Homecoming so enjoyable is its overall glow of casual intimacy. Tom Holland’s Peter Parker/Spider-Man is believably teenage, as if his voice has just gotten over the cracking stage, which makes his uncertainty about asking the cute girl (Laura Harrier’s Liz) to the dance that much more believable, and his deferential affection for his Aunt May (Marisa Tomei) particularly touching. It doesn’t hurt that Tomei is perfect, the cool-but-grounded aunt you wish you had, whether you have web-slinging capabilities or not. Sometimes the tone of a picture matters more than what happens in it, and Spider-Man: Homecoming strikes the right breezy notes.

The 2017 blockbuster that wins the Least Likely to Succeed Only to Defy Expectations Award is Matt Reeves’ War for the Planet of the Apes, in which the noble chimp Caesar (Andy Serkis) tries to build a world of peace for his fellow apes, only to be set back by a cruel, power-mad military overlord played by Woody Harrelson. Scene for scene, the storytelling isn’t particularly nimble. But the apes, who communicate mostly through body and sign language, elevate the story into something surprisingly graceful. Summer moviegoers are often sharply divided on whether their movie choices should be strictly escapist or should make them think at least a little, and War for the Planet of the Apes serves both functions seamlessly. Its civic ideals are sturdy but not bludgeoning. The movie’s view of human society is bleak, but its ending strikes a chord of melancholy hope.

Fantasy films and superhero movies are big in summer. Grand historical epics are harder to come by, and Christopher Nolan’s Dunkirk is one of the best of them. Nolan sets a series of dovetailing fictional narratives—featuring a stellar cast of actors including Tom Hardy, Mark Rylance, and young newcomer Fionn Whitehead—against the real-life events of the Dunkirk Evacuation in the early days of World War II. In late May and early June, 1940, some 380,000 stranded allied troops, beaten back by German troops, were almost miraculously rescued from the beaches of Dunkirk—partly by large transport ships but also by a flotilla of small boats, owned and operated by British citizens, that crossed the treacherous waters of the English Channel to come to the soldiers’ aid. Dunkirk is, for me, Nolan’s finest film by far, an ambitious, vital, emotionally detailed work.

It’s also a large-scale spectacle. Nolan shot the film so the best way to view it would be in an IMAX theater, projected in 70mm. If you’re near a theater equipped to show it that way, make an effort to get there. But if not, the film can also be seen in IMAX but digitally projected, or projected in 70mm—and don’t be intimidated by anyone who insists you must see it in a specific format. The emotional impact of Dunkirk, intensified by the power of the actors’ faces, isn’t likely to be diminished no matter how you view the picture—though seeing it big, as opposed to waiting to watch it on your iPhone or even your living-room TV, is definitely recommended.

When Patty Jenkins’ Wonder Woman, starring the glorious Gal Gadot, opened in June, social media feeds everywhere were ablaze with snapshots of little girls in Wonder Woman outfits striking power poses next to big cardboard Gadot-in-costume. Women viewers told stories of weeping at the film, possibly because they finally felt somehow recognized by Hollywood. This is an example of a film whose impact is intensified by what it represents, though the movie itself could be much better. Wonder Woman suffers from the same action clutter as nearly every other superhero movie. (On the plus side, the fact that such a financially successful picture was directed by a woman could help boost the pay scale for all women working in Hollywood, above the line or below it.) But Wonder Woman does have a few features that elevate it above most other films of its ilk, particularly its marvelous opening section set on Paradise Island, an all-woman enclave where the most fiery inhabitants are trained as fighters. In this Eden without men, they leap and tumble and soar on horseback, without anybody around to say, “Girls shouldn’t do that.”

But the real reason to keep watching, even after the movie has segued into stock superhero banality, is Gadot. As Amazon princess Diana Prince, she’s a lithe charmer with superbly toned muscles and nerves of steel. Striking as she is to look at, Gadot also knows her way around a punchline. As Diana expresses curiosity about certain physical attributes of a naked male newcomer to her island (played by good-sport Chris Pine), she shifts the discussion—or does she?—to questions about the wristwatch he’s wearing: “You let this little thing tell you what to do?”

Gadot is the best reason to see Wonder Woman, but she isn’t the only woman to ignite the big screen this summer. In Atomic Blonde, David Leitch’s nutso-entertaining adaptation of Antony Johnston’s graphic novel The Coldest City, Charlize Theron plays MI6 agent Lorraine Broughton, who’s sent to Berlin just as the Wall is about to come down, to perform a mission that, as laid out in the movie, is almost impossible to parse. Maybe it’s just as well. That way we’re left to bask in all that Theron has to offer. Her Broughton is a cool-strutting beauty who favors over-the-knee boots and skyscraper heels, as well as an assortment of perfectly tailored trenchcoats and other assorted outerwar. (This is coat porn of the highest order.) But Broughton’s true style lies less in what she wears than in how she walks and talks, and even in how she thinks. This is a canny, slow-burning performance. You think you can read Broughton’s thoughts just by gazing into her feline eyes, only to realize that whatever she calls the truth is elusive. Theron plays the character as a mystery to be solved—wherever she’s leading, it’s futile to resist.

If two great on-screen women aren’t enough for you, how about four more? At some point you’ll be able to watch Malcolm D. Lee’s raucous Girls Trip on an airplane or a personal device. But this is one movie that’s surely better watched with a crowd. We all have complaints about being a part of an audience, which means dealing with rude texters and talking-out-louders, not to mention just the sheer unpredictability of being in close proximity to other random humans. But Girls Trip, perhaps even more than most comedies, begs to be watched with a bunch of people—freewheeling and raunchy, it’s good medicine for the anxious masses.

This picture surpasses every other recent movie in the women-behaving-badly genre, thanks to the extraordinary foursome of Regina Hall, Queen Latifah, Jada Pinkett Smith and our newest national treasure Tiffany Haddish, who has a marvelous bit in which she’s fired by her boss, only to rehire herself about three times over. There’s also a hyper-surreal absinthe-drinking episode, and an instance of public micturition that’s a lot funnier, even, than the word micturition.

If you lose control, please don’t do it in your seat. That will ensure a safe and pleasant summer moviegoing experience for everyone. Thank you. 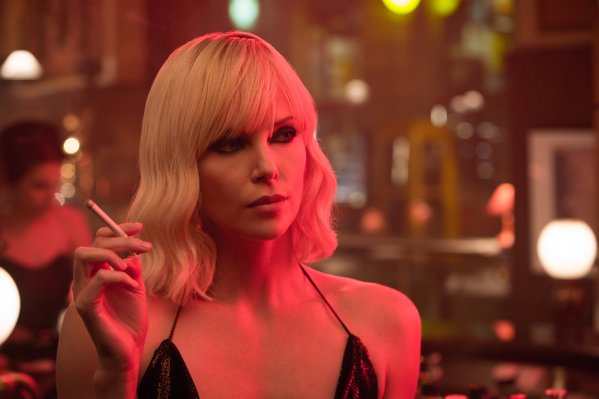 Review: Full of Feral Grace, Atomic Blonde Kicks You Where It Hurts
Next Up: Editor's Pick