Why President Trump Keeps Criticizing His Own Staff

With friends like these… President Trump has made no secret of his frustration with Attorney General Jeff Sessions over his decision to recuse himself from the Russia investigation. Last week he publicly expressed his displeasure, saying he wouldn’t have nominated him had he’d known that’s what Sessions would do. Today he’s calling Sessions “beleaguered” in a tweet, and criticizing him for not looking into unspecified “crimes” committed by Hillary Clinton. And some in the White House are floating potential replacements. It’s hardly the first time the president has allowed those who are working for him to flail in the wind. Outgoing White House Press Secretary Sean Spicer was the subject of incessant leaks from the President’s inner circle—often directed by him—that publicly undermined Spicer at every turn. Similarly, White House Chief of Staff Reince Priebus has been the subject of endless ‘will he, won’t he be fired’ speculation within the West Wing since day one. And National Security Advisor H.R. McMaster has been the subject of internal backbiting for months. Despite his Apprentice turn, the President has never been a fan of uttering the words “you’re fired,” but he is known for hanging his employees out to dry. It’s only a matter of time before more of his senior aides feel they can no longer put up with the parade of indignities.

Senate Republicans are set to vote on a healthcare bill this week—but even the lawmakers aren’t sure what they’re voting on yet, as Majority Leader Mitch McConnell explores how to get the votes for any legislation. Trump is expected to reluctantly sign new sanctions on Russia. And Jared Kushner denies he colluded with any foreign power.

The Trump White House’s War Within
His national security team wants a stepped-up fight in Afghanistan. There’s just one problem: A president who doesn’t want to be there [Politico]

For Trump and Putin, Sanctions Are a Setback Both Sought to Avoid
White House signals Trump will sign [New York Times]

Senate Republicans Unsure of What Health-Care Measure They Will Vote On
Vote, which is expected as soon as Tuesday, would allow debate on either a plan to repeal ACA or a more comprehensive bill to repeal and replace it [Wall Street Journal]

“So why aren’t the Committees and investigators, and of course our beleaguered A.G., looking into Crooked Hillarys crimes & Russia relations?” — President Trump on Twitter taking a shot at his own Attorney General Jeff Sessions

“The Failing New York Times foiled U.S. attempt to kill the single most wanted terrorist,Al-Baghdadi.Their sick agenda over National Security” — Trump, repeating a Fox News report that is not supported by facts

‘I Did Not Collude.’ Read Jared Kushner’s Statement to Congress [TIME]

Here’s Why Jared Kushner Is Testifying Behind Closed Doors [TIME]

Anthony Scaramucci: President Trump Is ‘Thinking About Pardoning Nobody’ [TIME] 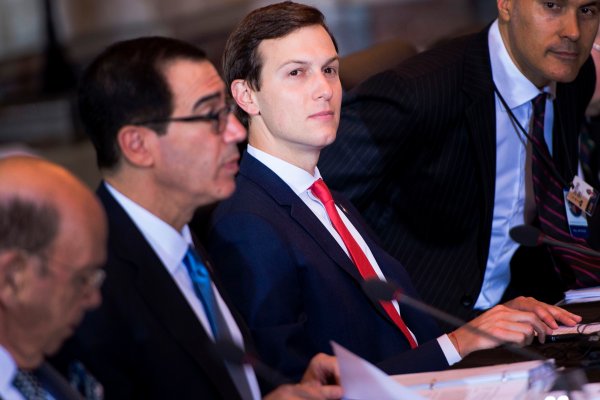 Here's Why Jared Kushner Is Testifying Behind Closed Doors
Next Up: Editor's Pick