Inside A Notorious Philadelphia Drug Market Before It Gets Shut Down

The temperature hovered around 85 degrees late one recent evening in Philadelphia’s Fairhill/Kensington neighborhood, where dealers sling heroin at nearly every corner  of  an area known as the “Badlands.” It is one of the largest open-air drug markets on the East Coast, according to Drug Enforcement Administration Agent Patrick J. Trainor, and the center of it all is a camp of makeshift housing structures known as “El Campamento.”

It is the harrowing entry point to a half-mile stretch of Conrail train tracks where addicts have been living, buying and injecting drugs for nearly three decades. For years, city and railway officials have wrangled over who is responsible for cleaning up the heaps of used syringes, empty wrappers, discarded furniture, dumped tires and other debris  —  and what to do about the addicts and dealers circulating through the area  to little avail.

Spurred by the opioid crisis, with 907 fatal overdoses in Philadelphia County last year alone, city and Conrail officials finally signed an agreement in June. Under its terms, the city and Conrail will clean the area and take steps such as building fences in an attempt to prevent it from reverting back into a shooting gallery.

An injured man wraps his wound with gauze provided by a neighbor while waiting for an ambulance in Kensington.
Jeffrey Stockbridge

Philadelphia officials say the city is committed to offering drug treatment to anyone willing to accept it, and are adding additional funding for supportive housing in the area. In preparation for the cleanup, which is set to begin at the end of July, the city officials has stepped up outreach efforts to connect those who have been living along and circulating through the tracks with services, according to Philadelphia Deputy Communications Director Alicia Taylor. “The boots are on the ground there, but we can’t make anyone do anything,” Taylor said. “We can’t make you go into treatment. We can’t make you apply for housing.”

On a recent visit to El Campamento, the fears and contradictions of its denizens and residents of the surrounding neighborhood were thrown into stark relief.

Many area residents are thrilled that action if finally imminent. “I would like it clean, so they can stop going down there and getting killed  —  what do they call it, ‘ODing’?” said Aida Figueroa, 48, who has lived near El Campamento for years.

“Everybody’s afraid of something around here,” said another neighbor, June, a longtime resident of Kensington who would not give his last name. “Back in the day it was worse — kids couldn’t even play out on the sidewalks… It’s a lot better now than what it was but there’s still a lot of deaths.” When someone dies on the train tracks, he said, residents can smell it.

A woman with her hair in a tidy bun, who declined to give her name or have her photo taken, said that she raised all of her kids in the area but she wanted to move. “For the kids, it’s no good,” she said. Even so, when an injured man recently climbed out from the tracks with a badly bleeding hand, she handed over a roll of gauze.

Across the street, past cement blocks the city has erected to try to prevent passage and parking, sprawled El Campamento, a drug nest in its waning days.

A scrawny man sitting near one of the remaining shacks was trying to hit a vein in his thin legs. A woman used a mirror hanging from a tree to inject near her eyebrow. Under the bridge, several people shot up near a table made from a wood slab atop an oil drum. Below “no dumping” signs were mounds of garbage: empty water bottles, discarded syringes, old tires, a soiled mattress. A man came out of a structure known as the “doctor’s office,” a hut made out of scavenged wood and tarps, where users can go to buy drugs and get help injecting for a fee. When asked about Conrail cleaning up the tracks, the man, who refused to give his name, said, “waste of money. Never going to work.”

John, 30, who said his drug of choice is speedballs — a mix of heroin and cocaine — said that he believes that the fact that so many people use at El Campamento makes it a safer place to get high. The “doctor” even keeps the opioid antidote Narcan in his “office.” What won’t change if the city succeeds at cleaning up the tracks, he said, is that addicts will still need to find some place to get high.

“It’s a terrible, terrible lifestyle,” John said, “and once it gets you, it won’t let you go.”

Gregory, 35, who grew up in Kensington and says he has been doing “hard drugs” for the past seven or eight years, says he tries to be mindful of children and neighbors when he shoots up. He’s in favor of the city opening a supervised injection facility. But, he says, though he wants to go to rehab he has not been able to get covered for inpatient treatment.

“It’s funny, ‘cause now that I actually want the rehab, I can’t get it,’ he says. “There’s a lot of stuff that goes on in these neighborhoods that not everybody is very happy about. If you could take that element out, I think it would make for a better community in general, even though I’m part of that element.”

Although the city has promised to provide services to those who are removed from the area, concerned citizens and harm-reduction activists — some of whom are lobbying for the city to open a supervised injection facility — fear these efforts may be insufficient.

“It’s a complex issue, so we want people to know that there’s a not a quick fix,” said Jose Benitez, director of Prevention Point Philadelphia, which offers services ranging from a needle exchange to shelter. “This is 30 years in the making, and for us to think that we’re going to solve it in a year or two is not realistic. There aren’t enough resources out there. It’s definitely not something that is going to be solved right away.”

Under the 2nd street bridge in El Campamento.
Jeffrey Stockbridge

If you or a loved one are seeking help for drug addiction, please contact samhsa.gov for more information

Courtenay Harris Bond is a freelance writer based in Philadelphia

Jeffrey Stockbridge is a Philadelphia-based photographer. See more of his work here 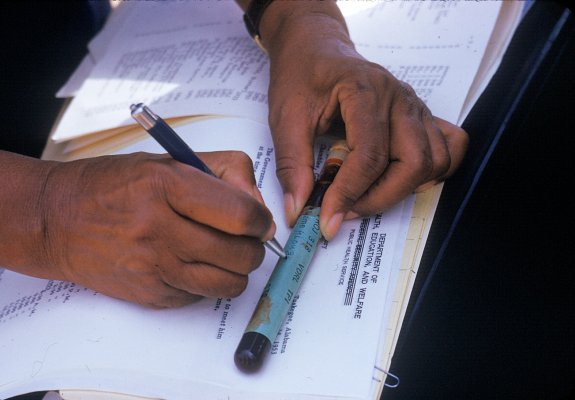 How the Public Learned About the Infamous Tuskegee Syphilis Study
Next Up: Editor's Pick