In a stunning admission, President Donald Trump said in an interview that he regrets appointing Attorney General Jeff Sessions and would have never done so had he known that Sessions would recuse himself from the Russia investigation, saying the decision was “very unfair to the president.”

“Sessions should have never recused himself and if he was going to recuse himself he should have told me before he took the job and I would have picked somebody else,” Trump said Wednesday in a wide-ranging interview with the New York Times.

Despite Sessions endorsing Trump back in February 2016 as the then-candidate was battling Ted Cruz, Marco Rubio and Chris Christie in the Republican primary, the President has apparently grown weary with the Attorney General, saying his recusal unnecessarily prompted the appointment of a special counsel into the Russia probe still clouding the Trump administration.

At the time of the endorsement, Trump said of Sessions: “I have a man who is respected by everybody here, greatly respected.”

The Department of Justice did not return a request for comment.

Trump’s criticism of public officials didn’t stop there, as he once again targeted former FBI Director James Comey, whom the President abruptly fired in May. In a brand new accusation, Trump said that Comey used a dossier with salacious material against the President as leverage so that Comey could keep his job. And Trump fired a warning at special counsel Robert Mueller, who is currently leading the FBI’s Russia probe, saying that an investigation into Trump’s family finances would cross a red line, the Times said.

“I think that’s a violation. Look, this is about Russia,” Trump said, though he refused to say if he would do anything about it should Mueller choose to investigate in that direction. 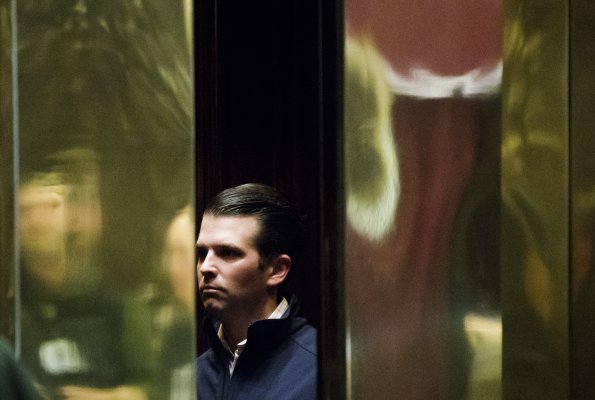 Trump Jr. and Manafort to Testify Before Senate
Next Up: Editor's Pick