The season seven premiere of Game of Thrones saw Arya seek revenge for the Red Wedding, Cersei begin her reign as Queen of the Seven Kingdoms and Daenerys finally arrive at House Tagaryen’s ancestral seat of Dragonstone. But there were also some more subtle scenes of significance interspersed with these major events.

In the midst of their journey north, the Brotherhood Without Banners decided to spend a night in the home of a farmer who once gave Arya and the Hound shelter — before the Hound stole his silver — only to find that both the farmer and his daughter were dead.

When the Hound began to question Beric Dondarrion about why the Lord of Light would continue to bring him back from the dead, Thoros of Myr directed the Hound to look into the fire to find the answers he sought.

After first denying that he could see anything but logs burning, the Hound described an ominous vision: “Ice, a wall of ice. The Wall…It’s where the Wall meets the sea. There’s a castle there. There’s a mountain, looks like an arrowhead. The dead are marching past, thousands of them.”

This seemed to be a reference to the same castle Tormund had earlier agreed to guard at Jon’s prompting — Eastwatch-by-the-Sea, the closest castle to Hardhome — perhaps indicating that it will be the location of the next major battle between the White Walkers and the living.

This moment also seemed like it could be a major turning point for the Hound, who has long struggled to believe in anything or anyone.

“He doesn’t believe in religion. He doesn’t like religion anyway,” said showrunner David Benioff during the post-episode rundown. “But he can’t deny the facts of what he’s seen. He’s seen Thoros raise Beric from the dead. So for the Hound, he wants to know, ‘what does this god want?’ Part of him hates it ’cause he thinks these people are fanatics and dull and gullible. But at the same time, he can’t deny the truth of what he sees. And part of that truth now is seeing these visions in the flames.” 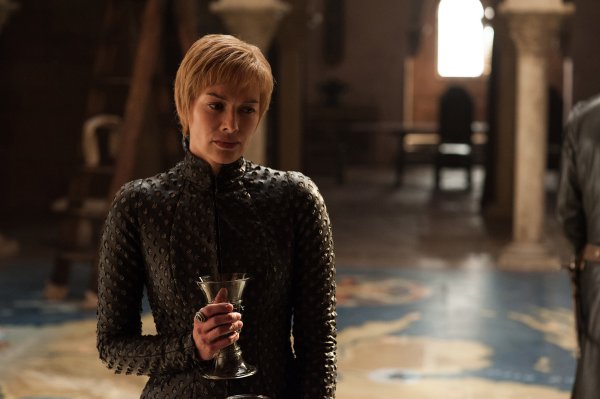 Game of Thrones’ Premiere Proves the Show Has New Tricks
Next Up: Editor's Pick