Senate Majority Leader Mitch McConnell was preparing Thursday for a meeting with fellow Republicans to walk them through the latest draft of the party’s healthcare bill. Then, out of the blue, the Senate boss saw two colleagues on TV announcing a competing plan—an extraordinary end-run in a body famous for its decorum and a caucus renowned for its discipline.

One insurgent, Sen. Lindsey Graham of South Carolina, insisted it wasn’t a power play. But there was no way to read it as anything other than a gambit to tank the GOP’s wobbling bid to reshape how millions of Americans get their healthcare coverage. Even before McConnell was able to pitch a new draft, there was mutiny afoot.

Cobbling together a bare minimum of 50 votes once again seemed to drift from highly unlikely to nearly impossible, at least for the moment. Among McConnell’s circle of current and former aides, there are serious doubts that either bill will even get debated on the floor of the Senate. After years of pledges to repeal and replace the Affordable Care Act, the Republican effort could still prove a disaster.

Some Republicans believe that breaking their promise may be less damaging than backing a measure that could cost millions of Americans their healthcare coverage. Although Republicans number 52 in the Senate, McConnell already expects to lose at least two colleagues. Among the cadre of Susan Collins of Maine, Dean Heller of Nevada, Ted Cruz of Texas, Rand Paul of Kentucky, Shelley Moore Capito of West Virginia and Rob Portman of Ohio, there are deep concerns about how the GOP plan would impact constituents, as well as incumbents’ re-election prospects. Concerns about the political costs are so deep that some Republicans may join Democrats in a filibuster to block debate.

That, Graham says, is why he jumped into the mix with a competing proposal. “We’re going to see which one can get 50 votes,” Graham told CNN. “We’re not undercutting Mitch. He’s not undercutting us.”

That’s not entirely true. The centrist version devised by Graham and GOP Sen. Bill Cassidy of Louisiana would take the nation’s healthcare budget and direct it to the states. Presumably, Democratic ones like New York or California could use the money to expand programs that already exist. Conservative states, meanwhile, could scale back those same popular programs in ways constituents say they want—even though red states consume more healthcare spending than they contribute in taxes to Washington. The federalism-on-steroids approach could attract small-government conservatives — at precisely the time McConnell cannot afford to lose those members from own proposal.

In its latest incarnation, the new McConnell plan would keep preserve planned cuts to Medicaid, retain some taxes on high income Americans and allow customers to buy plans that offer less coverage but come with less expense. This last proposal, put forward by Cruz, would allow the sale of skimpy coverage packages that don’t meet Obamacare’s minimum coverage requirements—including for things like mental health services and childbirth—as long as they offer at least one option that does. Many healthcare experts, including insurers, have suggested this approach would result in young and healthy people purchasing minimal plans, unbalancing risk pools and leaving older and sicker Americans to shoulder higher costs.

The new version left moderate Republicans cold. “I’m still deeply concerned about the Medicaid cuts that are included,” Collins told TIME. “It would hurt the most vulnerable citizens. It would have an adverse impact particularly on our rural healthcare providers, our hospitals, our nursing homes. And it is not something I can support.”

The McConnell revisions also include $47 billion for opioid treatment and a provision that allows customers to use pre-tax health savings accounts to pay for coverage. It also creates an additional fund to make payments to insurers to help cover costs. These modifications alone are unlikely to win over enough GOP critics, and some McConnell allies were predicting yet another round of rewrites because the Senate leaves for a summer break. Earlier this week, McConnell delayed the August recess by two weeks, hoping that keeping colleagues in town would spur them to action.

At the other end of Pennsylvania Avenue, Trump administration officials still maintain a healthcare bill can be passed by the beginning of August recess. Vice President Mike Pence has taken the lead in negotiations with the Senate, cajoling lawmakers at their weekly luncheons in the Capitol and inviting others to his West Wing office and his home at the Naval Observatory.

Meanwhile, President Trump has stepped back from the discussions, both publicly and in private. As the latest Senate draft was unveiled Thursday, the President was in Paris ahead of Bastille Day festivities. He has done little public campaigning on behalf of the bill. That’s partly at the request of McConnell, who views the mercurial president warily and argued his public efforts could backfire.

But Trump’s patience may be running out. He ratcheted up pressure on the GOP Senate leader in an interview with Christian Broadcasting Network on Wednesday, saying it would be “very bad” if McConnell failed to wrangle the votes.

“I will be very angry about it and a lot of people will be very upset,” Trump said. “I am sitting in the Oval Office with a pen in hand, waiting for our senators to give it to me. For years, they’ve been talking about repeal.”

The White House has also expressed frustration with the array of outside GOP groups that have failed to unify behind the Senate bill, allowing a united front from opponents to box-in Republican lawmakers. The administration and its allied outside group, America First Policies, have threatened to campaign against Republicans who vote against the bill, but to date that has only amounted to token spending.

“The left, I think, has been more organized in their messaging on this than collectively Republicans have as far as advocating for the benefits of the bill,” White House congressional liaison Marc Short said Monday.

The failure to pass a healthcare reform bill has frustrated Republicans. After nearly six months of unified GOP control of Washington, they know voters are running out of patience. “Look at our accomplishments so far,” said Sen. Jeff Flake of Arizona, who is up for re-election next year. “We need to do more. We’re the governing party.” 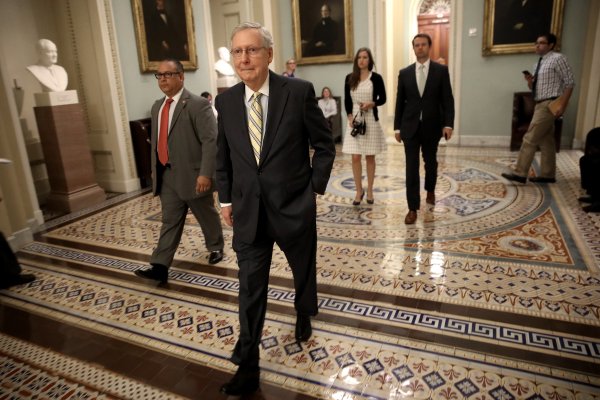 Here's What Just Got Added to the Senate's Health Care Bill
Next Up: Editor's Pick