President Donald Trump arrived in Paris on Thursday for a Bastille Day visit with French President Emmanuel Macron, with whom he has shared several awkward handshakes in recent months.

President Trump and First Lady Melania greeted their French counterparts outside Les Invalides before visiting the tomb of Napoleon Bonaparte. And when the Trumps left France on Friday, the leaders’ parting handshake lasted 25 seconds.

Trump has demonstrated an inclination for intense handshakes, but in the short time since Macron’s election, he and Trump have managed to draw international attention for their at-times awkward interactions.

Here’s how the Trump-Macron greetings have evolved:

One piece of footage from the Nato Summit in May showed Macron walking toward a group of NATO leaders. He appeared to be moving toward Trump, until he swerved to greet German Chancellor Angela Merkel first.

“As far as Macron’s concerned, Merkel is the most important person in the line-up,” India Ford, a body language expert and the founder of Talkbodylanguage, told TIME in May. “When he swerves towards her, you can see Trump thinking ‘wait a second — I’m the most important person here.’ Obviously, in any line-up you’d go first to the person who demands the most respect. In Macron’s eyes that must be Merkel and Trump is not pleased.”

When Macron greeted Trump shortly after Merkel, their first handshake resembled an aggressive “tug of war” that lasted too long.

Their second handshake at the NATO Summit also lasted an unusually long time, as the two leaders maintained a tight grip that turned their knuckles white before they finally pulled away. “It’s a very aggressive handshake — it’s like a knuckle-buster,” Ford told TIME in May.

According to a pool report description, “Macron came over and had another aggressive ‘tug of war’-style handshake with Trump, reminiscent of the drawn-out grip the two had in Brussels in May. This time, after a few seconds, Trump pulled Macron’s hand toward his chest in more of a hand clasp.”

Their greeting on Thursday appeared friendly — Macron put his left hand on Trump’s back, and Trump patted Macron’s arm. But once again, their handshake lasted an unusually long time, as both seemed reluctant to break away, even while Trump turned and appeared to comment on his surroundings.

At the conclusion of Trump’s trip to France on Friday, his parting handshake with Macron lasted about 25 seconds. They held their grasp, even as Trump turned to embrace France’s First Lady Brigitte Macron and say goodbye. 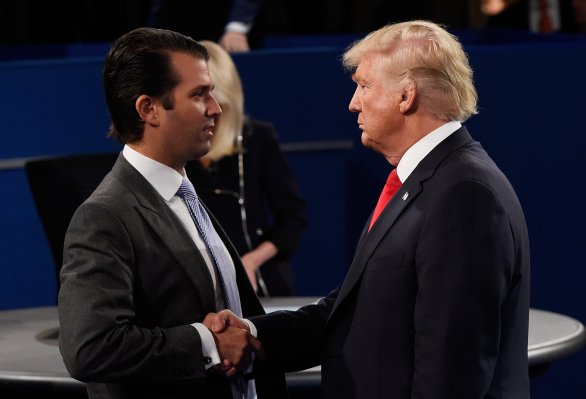 ‘Open, Transparent and Innocent.’ Everything President Trump Has Said to Defend His Son Amid Email Scandal
Next Up: Editor's Pick