Warning: This post contains spoilers for both the Game of Thrones TV show and George R.R. Martin’s A Song of Ice and Fire book series.

However, this plan for realm domination may not play out like she expects, as a detail from her past may prove to be her ultimate undoing.

In a flashback sequence in the season five premiere, we saw a young Cersei having her future told by a witch named Maggy the Frog. “Everyone wants to know their future, until they know their future,” Maggy says. “You will never wed the Prince, you will wed the King…You’ll be Queen, for a time. Then comes another — younger, more beautiful — to cast you down and take all you hold dear…The King will have 20 children, and you will have three…Gold will be their crowns, gold their shrouds.”

The majority of these predictions have already come true. Cersei was promised to Prince Rhaegar Targaryen as a young girl, but ended up marrying King Robert Baratheon following Robert’s Rebellion. He went on to father many illegitimate children while Cersei’s three kids — who are all dead — were a product of her incestuous relationship with her twin brother Jaime. The only ambiguity is the mention of the younger, more beautiful queen, who some believe was Margaery and others think will prove to be Daenerys.

However, while it seems as though Cersei assumed the prophecy was predestined, some have posited that it may actually be self-fulfilling — i.e., the predictions have only come true because Cersei’s expectation that everything would happen caused her to act in ways that (directly or indirectly) made them a reality.

One example of this would be the wildfire explosion she orchestrated to murder Margaery Tyrell, the High Sparrow and everyone else she believed would further the divide between her and Tommen. Her actions led to Tommen committing suicide.

Even Lena Headey — who plays Cersei on the show — seems to think this theory has some merit. During an interview with TIME, she spoke about the moment Cersei felt the prophecy had finally come to fruition.

However, in A Feast For Crows — the fourth novel in Martin’s series — there is a final line to the prophecy that the show did not include: “And when your tears have drowned you, the valonqar [High Valyrian for “little brother”] shall wrap his hands about your pale white throat and choke the life from you.”

Cersei has long believed Tyrion to be the valonqar in the books and even has a vision of him murdering her in AFFC after he escapes from his cell in the Red Keep and kills Tywin.

Despite the absence of the valonqar line in Thrones‘ version of the prophecy, it’s clear she has always harbored extreme ill will toward her youngest brother. “We’re the last Lannisters,” she says to Jaime in the season seven trailer as a shot of Tyrion flashes. “The last ones who count.”

However, as the second-born twin, Jaime is technically also her little brother, causing some to believe that he will ultimately be the one to kill her. This seems especially likely considering that Cersei has now committed the very act that Jaime murdered the Mad King to prevent — burning the innocent people of King’s Landing.

“Is it just something where she has built up so much hatred and animosity toward her little brother,” said YouTube personality Rawrist during the “Mad Queens” panel of the Game of Thrones fan convention Con of Thrones. “To me it would be fabulous if that prophecy went nowhere. You just have this woman her entire life freaking out, doing things left and right just trying to stop that prophecy and in the end…”

If it comes to light on the show that Maggy did in fact tell Cersei of the valonqar and Jaime turns against Cersei as she grows more unhinged, her obsession with the prophecy may end up being the cause of her downfall rather than the prophecy itself. 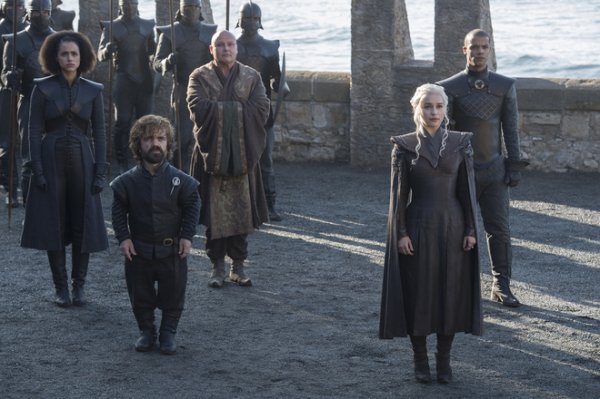