Two protesters were arrested for trespassing on Arizona Senator Jeff Flake’s office in Tucson Thursday, with one also facing an additional charge of threats and intimidation after allegedly referencing the shooting of House Majority Whip Steve Scalise.

Protesters had gathered outside Flake’s office Thursday morning. The Pima County Sheriff’s Office wrote in an e-mail to TIME that staffers working at Flake’s office had told them a protester, later identified as Pritchard, had made a comment relating to the shooting of Scalise that had caused them to call the Sheriff’s office and lock their doors.

Scalise was shot on June 14 when a gunman, later identified as James Hodgkinson, opened fire on a Republican practice for a congressional baseball game, and was in critical condition after sustaining damage to his internal organs. He was readmitted into the intensive care unit July 5. Flake was at that practice with Scalise and was the one who told Scalise’s wife about the shooting.

Pritchard was initially arrested for trespassing, and was charged with threat and intimidation after an additional review of his comments.

Diehl was charged with trespassing when he tried to push himself inside after a staffer opened the door to hand out information, according to the sheriff’s office. The incident has now been referred to the Capitol Police.

The arrests come one day after five people were cited for trespassing at Flake’s Phoenix office after they refused to leave the office building at the end of the day. Phoenix police told TIME the protesters were not arrested, just cited and released.

With reporting by Sarina Finkelstein 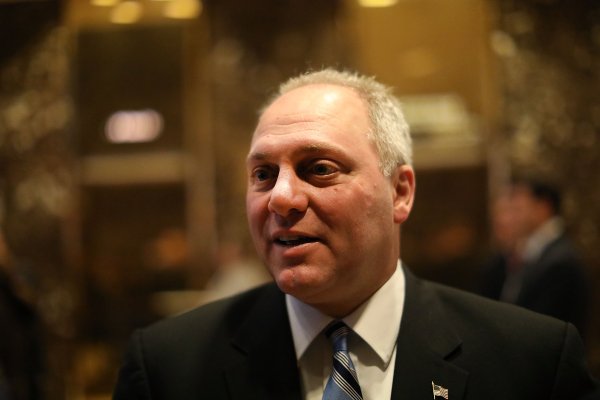 Congressman Steve Scalise Is Back in Intensive Care
Next Up: Editor's Pick