South Korean President Moon Jae-in is making his first visit to the U.S. as president this week, and is due to sit down with President Donald Trump on Friday. While the visit won’t be as palpably awkward as Angela Merkel’s, things will be tense — and not just because of Trump. Moon brings plenty of his own baggage to the proceedings. Here’s what you need to know:

Moon assumed office a little over a month ago, and represents the progressive wing of South Korean politics. His election victory was a repudiation of conservative President Park Geun-hye, who ended her tenure with a four percent approval rating and was impeached over allegations she abused her authority and allowed a close friend to extort money from Korea’s business conglomerates, the chaebols. South Korean business and political elites run in the same circles, and patronage is baked into the political system. Each of the last four presidents—or their close relatives—have been engulfed in corruption scandals. People want that to change, and much of Moon’s appeal flows from the perception that he is a “clean” politician. That’s partially reflected in his popularity, currently hovering around 80 percent.

Moon also brings change to his country’s foreign policy. South Korea has been governed by a string of pro-U.S. presidents, most of whom have shared Washington’s hardline attitude toward Pyongyang. Moon seeks to change tack, even as the rhetoric between Washington and Pyongyang heats up.

2. …who wants to bring North Korea in from the cold

How? By sticking to the basics of South Korea’s “sunshine policy”, Seoul’s on-again, off-again plan since the 1980s to thaw relations with North Korea via constructive engagement. This is no progressive, elitist policy proposal, either; nearly 77 percent of South Koreans believe Seoul should restore dialogue with Pyongyang to help “resolve” North Korea’s nuclear program. Moon has gone further, floating the prospect of economic cooperation with Pyongyang as a way of raising living standards for North Koreans and defraying the costs of potential reunification down the road. In a 2013 paper, RAND estimated that reunification between north and south could cost about $2 trillion—$500 billion for military operations, another $500 billion for damages, and $1 trillion for building the North’s economy. Just think: Germany’s reunification in 1990 cost West Germany approximately $1.9 trillion—and East Germany was lightyears ahead of where North Korea is right now.

3. But his country is caught between China and the U.S.

The world’s two great geopolitical powers are at odds with how to deal with North Korea. The U.S. is unsurprisingly concerned that an openly hostile regime is developing the capacity to strike the U.S. mainland with a nuclear weapon. Short of that, the U.S. has multiple defense treaties that require it to come to its allies’ defense.

Beijing, meanwhile, is more worried about a North Korean regime implosion. China is responsible for more than 90 percent of North Korea’s trade and most of its food and energy supplies. But a collapse of the Kim Jong-un regime would flood China with distressed North Korean refugees. The International Rescue Committee believes between 30,000 to 60,000 North Korean refugees already live in China; if North Korea goes under (population 25 million), China would face millions more.

Moon knows that all these points give the U.S. and China a compelling interest in his approach to the North. Not to mention it’s in a tough neighborhood; 11 of the 15 largest militaries in the world are in or adjacent to Asia. China, India, Pakistan, Russia, and North Korea all have nuclear weapons.

4. Then there’s the trouble with THAAD

Adding pressure to Moon’s relationship with Trump is the current row over installation in South Korea of the U.S. Terminal High Altitude Area Defense (THAAD) missile system, which is designed to shoot down short-, medium- and long-range missiles. The THAAD deal was originally negotiated by the Park administration, and two of the six missile launch platforms that normally comprise each THAAD battery have already been installed. The other four are being delayed until an environmental study is done, however, and Moon has been ambiguous on the program’s future. The THAAD deployment provides the U.S. additional force projection and security for its 28,500 troops stationed in the country. At the moment, 55 percent of South Koreans say they support the THAAD installations.

China opposes THAAD, because it fears that Washington will use it to reduce China’s military leverage by working with South Korea and Japan to build out what might become a broader and more comprehensive missile defense system. It’s also worried that the radar system employed by THAAD could theoretically be used to track Chinese missile launches (though the U.S. stresses that THAAD is not designed or even necessarily capable of serving that purpose), which is a serious security concern for Beijing.

China has responded by imposing economic restrictions on South Korean firms that have forced some to shutter operations in China; Hyundai for example is expecting a 65 percent drop in its China sales for the month of May. China is also restricting tourism to South Korea; more than half of all tourists to South Korea are from China. If China maintains the travel ban, as much as 20 percent of South Korea’s GDP growth could be knocked off according to Credit Suisse.

5. All of which adds up to a tricky balancing act for Moon

South Korea is in a uniquely difficult position. It can’t afford to keep China, its largest trading partner, at arm’s length. The value of its exports to China are more than double those headed to the US. For a country where exports account for 46 percent of GDP, that’s not something you take lightly. China has threatened more economic repercussions if THAAD installations continue.

Neither can it risk relations with the U.S. More than anyone else, South Korea is existentially threatened by Pyongyang; North Korea has conventional artillery trained on Seoul with enough firepower to seriously damage the city (just 35 miles away) in mere hours. While THAAD doesn’t help guard against this type of shelling, Moon knows the presence of the U.S. military in his country is a major deterrent that goes beyond the number of troops stationed there or artillery deployed.

Each ally tries to thread the needle with Trump as best it can. It’s just much harder for South Korea than for anyone else. 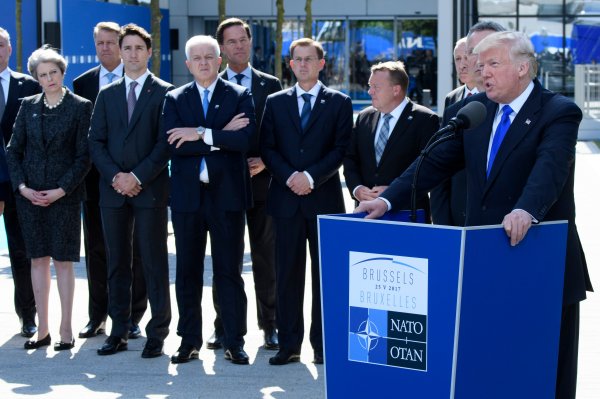 5 Signs We're in a 'G-Zero Era' With No World Leadership
Next Up: Editor's Pick