What Happens to Spider-Man After Homecoming

Spider-Man: Homecoming swings into theaters on July 7. But after that, Spider-Man will be sticking around for quite a long time. New Spidey Tom Holland signed a six-picture deal to play the webslinger, which includes three solo movies. He’s already filmed two of those films — Holland made his debut in last year’s Captain America: Civil War and had his first solo outing in Homecoming — and is set to appear in next year’s Avengers: Infinity War.

Meanwhile, Sony is planning to make two Homecoming sequels and build out a universe made up of the various villains and allies in Spidey’s world. Here’s what’s next for the boy who was bitten by a spider.

Marvel has confirmed that Tom Holland will reprise his role as Spider-Man in next year’s Avengers: Infinity War. The massive movie will unite characters from across the Marvel Cinematic Universe — the Avengers, the Guardians of the Galaxy, Doctor Strange, Black Panther, Captain Marvel and Spider-Man — to fight the ultimate big bad: Thanos.

Marvel has released few plot details about the film, but we do know that Thanos will try to unite the Infinity Stones — six objects that have popped up in various movies — to wield a frightening amount of power. The Avengers are ill-equipped to take on the evil alien since the events of Civil War have split them into two camps. Iron Man will likely recruit Spider-Man early on to help him in this fight for the universe.

Tom Holland has said that Spider-Man: Homecoming is the first in a trilogy of Spider-Man films, a la Sam Raimi’s original Spider-Man series. The sequel will drop July 5, 2019. Plot details from the yet-unnamed films have yet to be announced. But the end of Homecoming offers some hints. Spoilers ahead.

It’s safe to assume that Spidey will return with his two friends, Ned (Jacob Batalon) and Michelle (Zendaya) who eventually reveals that, yes, she goes by MJ. Mary-Jane (a.k.a. MJ) is Peter Parker’s love interest in the comic books and the Raimi movies.

The Vulture is also likely to return. Michael Keaton’s baddie survives the movie and in a post-credits sequence refuses to reveal Spider-Man’s identity to a fellow prisoner. Clearly he’s plotting. End of spoilers.

Sony is building a cinematic web. First up: a movie about the villain Venom starring Tom Hardy, due out next year. Venom is an alien symbiote that attaches itself to a host and imbues him or her with Spider-Man-like powers. Venom is a major villain in the Spider-Man comic books and played a prominent role in Sam Raimi’s 2007 Spider-Man 3 movie. Venom first infected Peter Parker (Tobey Maguire), turning him into a bad boyfriend and cocky dancer. It later infected Eddie Brock (Topher Grace).

It’s unclear whether Tom Holland will appear in Venom, but Sony has said that the movie will exist separately from the Marvel Cinematic Universe. So don’t expect Iron Man to show up to fight the emo Spidey.

Sony has announced that Love & Basketball director Gina Prince-Bythewood will direct Silver & Black, a movie that is meant to set up an all-female superhero team. It will center on two of the major female characters from the Spider-Man universe, Silver Sable and Black Cat.

Spider-Man: Homecoming hints at at least one other possible spinoff: a Miles Morales movie. In the comic books and animated movies, Miles Morales — another young kid from New York — picks up the Spider-Man mantle. A conversation between two characters in Homecoming hints at the existence of a not-yet-superpowered Morales in the Marvel Cinematic Universe. Sony and Marvel could be setting up another spinoff series for when Tom Holland outgrows the Spidey role. 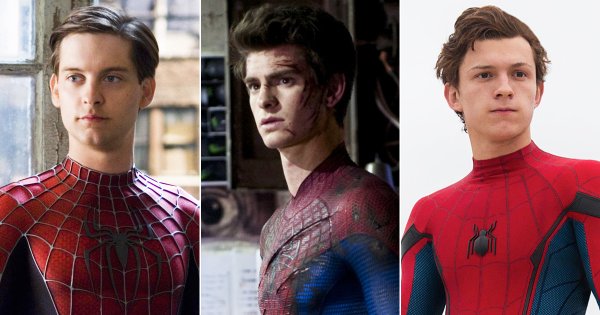 This Is the Definitive Ranking of Every Single Spider-Man Movie
Next Up: Editor's Pick