How Exercise May Protect the Brain From Alzheimer’s Disease

Regular exercise may offer some protection against Alzheimer’s disease, even for people who are genetically at risk, according to recent research.

To illuminate the relationship between brain activity and exercise levels, everyone wore an accelerometer for a week to measure their daily physical activity and received PET scans to measure glucose metabolism, which reveals neuron health and activity, in several regions of the brain. For people with Alzheimer’s disease, these regions tend to have depressed glucose metabolism.

Researchers found that people who spent at least 68 minutes a day engaged in physical activity at a moderate level—the equivalent of a brisk walk—had better glucose metabolism in all of those regions than those who spent less time doing so.

The amounts of time spent being sedentary or doing less-intense physical activity (like slow walking) were not associated with changes in any of the brain regions studied. Vigorous activity was linked to better glucose metabolism in one brain region—the hippocampus—but not in the others.

Larger doses of high-intensity exercise may be needed to provide the benefits of just “a modest increase” in moderate activity, the authors wrote, suggesting that you don’t have to exercise to the extreme to get brain benefits. Past research comparing the brain-boosting power of moderate- and vigorous-intensity exercise has been mixed, says lead author Ozioma Okonkwo, assistant professor of medicine at the University of Wisconsin School of Medicine and Public Health. But in general, he says, the evidence suggests that “light activity is insufficient, and vigorous activity might be unnecessary.”

Being able to quantify the connection between moderate-intensity activity and brain health is an exciting and important step in Alzheimer’s research, the researchers say, although further studies are needed in order to show a cause-and-effect relationship between exercise and glucose metabolism—and to demonstrate real-life benefits. (The team is currently recruiting people with concerns about their brain health for a clinical trial to help determine the right dose of exercise for people with mild memory problems.)

But Okonkwo points out that previous research has already established a connection between glucose metabolism and cognitive function. “We’re showing now that a moderate-intensity active lifestyle actually boosts neuronal function,” he says. “I don’t think it’s too much of a leap to make the argument that this probably is one of the pathways through which exercise prevents cognitive decline in middle life.”

Okonkwo says this research offers reassurance that people can take steps to protect themselves against Alzheimer’s disease, even if they are at high genetic risk. “The evidence shows that it’s never too late to take up and maintain a physically active regimen,” he says. “It also suggests that the earlier you begin and the longer you continue it, the more benefits you tend to accrue.” 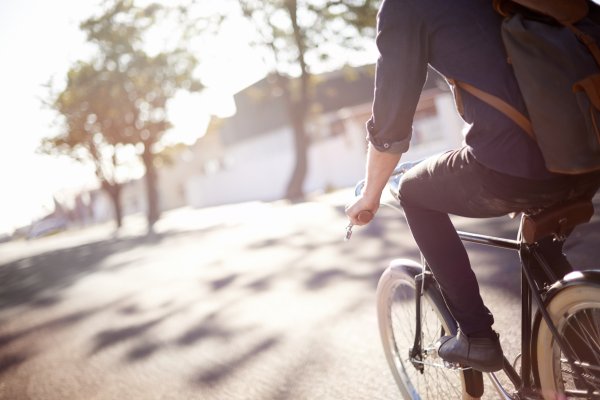 The Easiest Way to Be Less Stressed at Work
Next Up: Editor's Pick