And when it comes to celebrations, Justin Trudeau is all in. He was ready to champion the festivities at Toronto’s annual Pride parade for the second time, as well as Eid al-Fitr, the holiday that marks end of the Islamic holy month of Ramadan.

The kayaking, hiking Internet favorite led the Toronto Pride parade down Yonge street Sunday as thousands cheered the rainbow procession — and online, where people loved to see the leader’s total involvement. In honor of gay pride month, pride flags flew high across the globe Sunday to honor the 1969 Stonewall Riots, the milestone demonstration that sparked the LGBTQ rights movement.

Some people really loved one photo in particular that revealed Trudeau’s all-important socks did double duty. Along the parade route, he stopped to hi-five a young girl dressed as superhero. As he knelt, the photo captured his rainbow socks — which likely celebrated the LGBTQ community. While the colors were flashy, the Internet was quick to point out they also read “Eid Mubarak” to honor Eid al-Fitr, Muslims’ worldwide celebration of the end of the month-long Ramadan fasting.

In addition to his buzzy footwear made by Halal Socks, he also wore a some temporary ink — a rainbow colored maple leaf. And he waved a rainbow flag along with activists.

A member of the Liberal Party, Trudeau is a self-described feminist who has advocated for inclusivity with welcome messages to refugees and has championed trade deals. Thousands loved the photos, while some of his critics expressed his participation amounted to political photo opportunities.

“It’s all about how we celebrate the multiple layers of identities that make Canada extraordinary and strong,” he told reporters before marching.

He also issued a statement about Eid al-Fitr Sunday. “The community spirit felt at Ramadan food banks in Montreal & Toronto reminds us all: no matter our backgrounds, we’re in this together.”

See more photos of Trudeau at the parade below.

Trudeau was Canada’s first Prime Minster to fly the rainbow flag, and the first ever to march in a pride parade, which he first did in 2016. 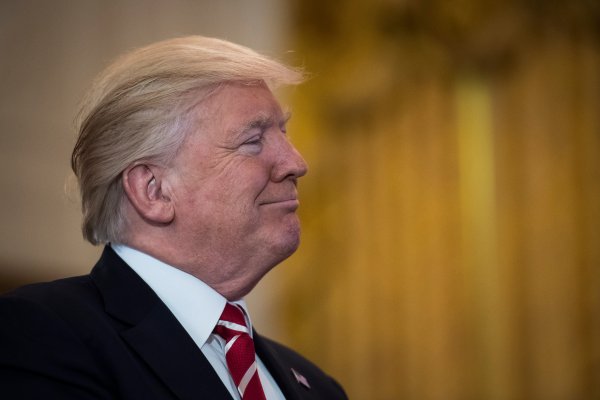 5 Reasons Why America Is Still a Strong (If Dysfunctional) Liberal Democracy
Next Up: Editor's Pick