Park guests and employees at Six Flags Great Escape park in upstate New York became unlikely heroes when they stepped in to rescue a teenage girl dangling from a gondola ride, working together to catch her as she fell 25 feet into their arms.

The 14-year-old girl, who has not been publicly identified, did not sustain any serious injuries in the Saturday incident, according to local authorities. She was riding the “Sky Ride” at Six Flags Great Escape in Queensbury, New York when she slipped out of the gondola chair.

Video captured at the scene shows her dangling from the two-person gondola as park guests gather below her. The girl’s neck initially appeared to be stuck in the gondola, but she was able to untangle herself before dropping 25 feet.

Loren Lent, a mail handler from Glenville, New York who was in the park during the incident and captured the scene on video, said he was waiting for his children to finish at the Sky Ride when he heard screaming and saw a rider dangling.

“I just pulled my phone out and turned it into video because I was amazed it’s not something you’ve ever seen or would want to see,” he told TIME.

He videotaped for about 20 seconds, he said, and he and half a dozen men began strategizing how to catch the girl when the ride was completely stopped. One man climbed up a tree to push the branches out of the way.

As she began to drop, someone in the crowd that had gathered below her can be heard yelling, “We’ll catch you honey!”

“I think it was an impulsive coordination,” Lent said. “It was a bunch of strangers coming together to help out a person in an emergency situation.”

Lent was frustrated though; he said not one park employee was on the scene initially. When they did arrive, he began yelling at them, because he thought they weren’t moving quickly enough. A security guard asked him to remove himself from the scene, so he ultimately shot video of the girl’s rescue.

The footage shows her hitting a tree as she fell, but cheers erupt as the girl is caught.

Six Flags said in a statement that the girl was caught by “guests and security personnel.”

Emergency medical services were sent to the scene, and she was transported to a local hospital, before being transported by helicopter to a hospital in Albany. She remains there, authorities said, in stable condition and with no serious injuries.

Authorities said a 47-year-old man was also hospitalized when he hurt his back trying to catch the girl, but has since been released.

The Sky Ride, listed under “Family Rides” on the park’s website, is described as “a roundtrip ski-lift style gondola ride.”

Lent, who says he is a season pass holder, says this incident won’t infringe on his visits to the park, but he won’t be sending his family on the Sky Ride anytime soon.

The Warren County Sheriff’s office said they inspected the ride with park personnel and found that everything was working correctly.

Six Flags said that the New York State Department of Labor cleared the ride to operate, but it is remaining closed while the park conducts an internal review.

“We are in the process of gathering more information,” Six Flags Queensbury said in a statement. “The safety and security of our guests is our top priority and our thoughts and prayers are with our guest and her family.” 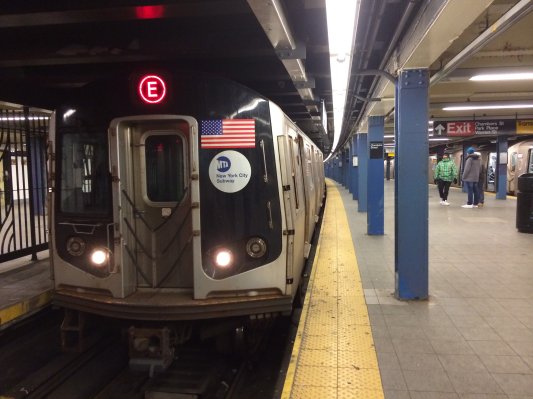 This New Project Is Turning the New York City Subway Into a Mobile Library
Next Up: Editor's Pick