President Trump Admits He Doesn't Have Tapes of James Comey

President Donald Trump conceded Thursday that he does not actually have tapes of his conversations with former FBI Director James Comey, weeks after his implication that he might have such recordings set up a high-stakes showdown with Comey and with Congress.

“With all of the recently reported electronic surveillance, intercepts, unmasking and illegal leaking of information, I have no idea whether there are ‘tapes’ or recordings of my conversations with James Comey, but I did not make, and do not have, any such recordings,” Trump said in a pair of Twitter posts.

The admission, on the same day Senate Republicans unveiled their health care repeal bill, came after weeks in which neither Trump nor other Administration officials would say definitively whether such tapes exist — or even whether or not there is a secret recording system in the White House. The House Intelligence Committee had set a Friday deadline for the White House to clarify whether the tapes exist.

Last month, three days after Trump fired Comey, he tweeted, “James Comey better hope that there are no “tapes” of our conversations before he starts leaking to the press!”

That tweet came one day after the New York Times reported that, at a private dinner, Trump had asked for Comey’s loyalty, and Comey demurred — an account that was later confirmed by Comey in congressional testimony earlier this month. The revelation that Trump has no tapes means that Comey’s testimony — sworn under oath — remains for now the most detailed account of the interactions between the two of them while Comey was still FBI Director.

At his testimony, Comey said he would be happy for Trump to release the tapes should they exist. “Lordy, I hope there are tapes,” he said at the time.

Special Counsel Robert Mueller is now overseeing the investigation into Russian interference in the 2016 election, and is reportedly also looking at whether Trump attempted to obstruct justice in his interactions with officials surrounding the probe. 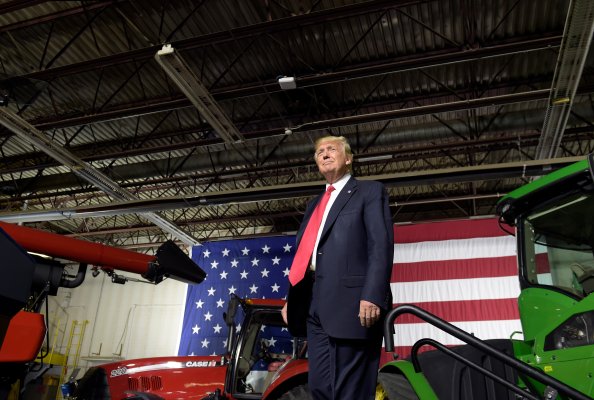