President Trump was in rare form Wednesday night as he held a campaign rally for the fifth time in as many months. Speaking to thousands of supporters in Iowa, the president launched into a rambling defense of his Administration and at times exaggerating his accomplishments in office. Trump reiterated his support for a border wall—suggesting that solar panels be emplaced on it—and said he would push for legislation requiring immigrants to be self-sufficient. The pro-Trump outside group America First Principles is out with a new ad lauding Trump for fighting back against Democrats and the media, and the President echoed those themes on stage. Trump largely shied away from discussing the Russia investigation, saving that for a series of Thursday morning tweets critical of Democrats. They were timed just as Republicans on Capitol Hill released their version of a bill to repeal and replace Obamacare—which had been negotiated in secret among Republicans for weeks and for which Senate Majority Leader Mitch McConnell hopes to bring up for a vote next week.

The Senate bill looks a lot like the House bill, with some key tweaks to essential health benefits and the the timing of the shift away from Medicaid expansion. The Congressional Budget Office says it will score the bill by next week. The House bill, CBO estimated, would cause 23 million people to lose coverage by 2026. The bill faces an uncertain future in the Senate, where many lawmakers are getting their first look at the bill along with the public—and several don’t like it. The GOP can afford to lose only two Senate Republicans if they hope to fulfill one of their and Trump’s core campaign promises.

TIME’s cover this week feature special counsel Robert Mueller, who is tasked with conducting an investigation that now appears set to include the conduct within the Oval Office. TIME’s Massimo Calabresi scoops on a different element of that Russia investigation—that election hackers altered voter rolls and stole private data.

Pelosi Faces Growing Doubts Among Dems After Georgia Loss
There’s a lot of grumbling by rank-and-file members, but no leadership change is imminent [Politico]

Flynn May Have Aided Russian Company the U.S. Opposed
More scrutiny for other Trump aide [McClatchy]

“I love all people, rich or poor. But in those particular positions I just don’t want a poor person.” — President Trump at a rally in Iowa

“All we do is win, win, win. We won last night.” — Trump at the rally on the results in the Georgia special election 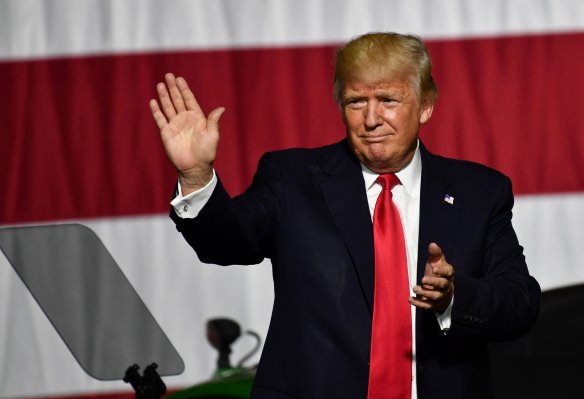 Trump Admits He Doesn't Have Tapes of Comey
Next Up: Editor's Pick