Spam Is Turning 80. Here's How the Canned Meat Took Over the World

Spam, photographed in 2015
Kevin Schafer—Getty Images
By Olivia B. Waxman

Spam — the square can of pork, salt, water, sugar, potato starch and sodium nitrite that first rolled off the assembly lines 80 years ago during the Great Depression — was invented “as a way to peddle the then-unprofitable pork shoulder,” according to The Oxford Encyclopedia of Food and Drink in America. It was the invention of Jay Hormel, son of George Hormel who founded the Hormel company, which pioneered canned pork products in Austin, Minn., in the late 1920s.

According to the company’s Spam Museum, Ken Digneau, the brother of a Hormel executive, came up with the name — a portmanteau word for “spiced ham” — in a naming contest and got $100 as a reward. The new product was introduced on July 5, 1937.

Despite the plethora of early Spam ads aimed at housewives who wanted cheap, quick meals requiring almost no prep, some of the members of that target demographic were hesitant to eat meat that didn’t need to be refrigerated. But it didn’t take long for the U.S. military to find a use for the food innovation. Spam went global during World War II, when America shipped out over 100 million cans to the Pacific, where it made an inexpensive yet filling meal for U.S. troops. As TIME later noted, “Among fed-up fighting men from Attu to Anzio, Spam became one of the most celebrated four-letter words in World War II, gave birth to a flavorsome literature of tales, odes, jokes, limericks.” It remains popular in areas where soldiers were stationed, especially in Hawaii, Guam and the Philippines. Spam also became part of aid packages to devastated Europe and Russia. As the former Soviet Premier Nikita Khrushchev wrote in his memoir Khrushchev Remembers: “There were many jokes going around in the army, some of them off-color, about American Spam; it tasted good, nonetheless. Without Spam, we wouldn’t have been able to feed our army. We had lost our most fertile lands.”

To keep up Spam sales postwar, the company hired singers to tout the product, and even had a radio show Music With the Hormel Girls. Whatever the reason, it worked: Hormel produced its billionth can in 1959, amid rising sales. And yet the Spam-eating Vikings in the 1970s Monty Python’s Flying Circus skit is the pop culture Spam reference most people will remember. 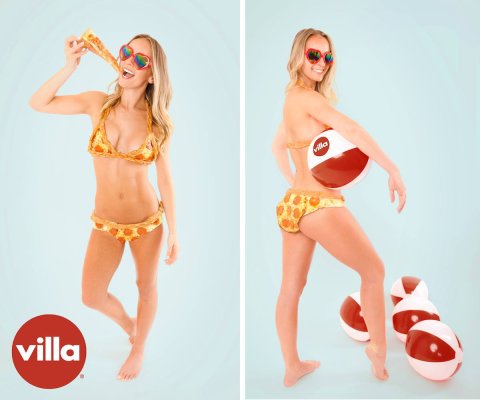 Luxuriate in the Era of Convenience With a $10,000 Bikini Made of Actual Pizza
Next Up: Editor's Pick