Following his brief reappearance in Game of Thrones‘ sixth season, Beric Dondarrion is set to make an epic return in the coming seven episodes.

The leader of the Brotherhood without Banners — who has been repeatedly resurrected after being originally killed by the Mountain — was last seen successfully recruiting the Hound to travel north. Based on footage from Thrones‘ new season seven trailer, it looks as if Beric will wield his famed flaming sword in a battle against the White Walkers. However, this sword — which he first used during the Hound’s season three trial by combat — isn’t just an intimidating weapon. It’s also an integral part of the legend of the One Who Was Promised, a prophesied savior in the religion of R’hllor who is the reincarnation of hero Azor Ahai.

According to the prophecy of the One Who Was Promised, the One is destined to “lead the people against a darkness” — namely, the White Walkers — with a flaming sword called Lightbringer. “There will come a day after a long summer when the stars bleed and the cold breath of darkness falls heavy on the world,” it reads. “In this dread hour a warrior shall draw from the fire a burning sword. And that sword shall be Lightbringer, the Red Sword of Heroes, and he who clasps it shall be Azor Ahai come again, and the darkness shall flee before him.”

Jon and Dany have both been declared the One Who Was Promised by two different Red Priestesses of the Lord of Light, Melisandre and Kinvara, respectively. But as the only other character who has experienced a seemingly miraculous rebirth, Beric also fits the prophecy’s description.

Of course, considering Beric is already dead in George R.R. Martin’s A Song of Ice and Fire series, this doesn’t seem likely. Luckily, the trailer may offer another clue about what’s to come.

At the 1:21-minute mark, there is a shot of Jon fighting alongside Beric in the North, indicating that their forces will link up at some point. If Beric were to actually die during this battle — as all men must — his Red Priest Thoros of Myr may not be able to bring him back for a seventh time, creating the perfect opportunity for Jon to gain control of Lightbringer. 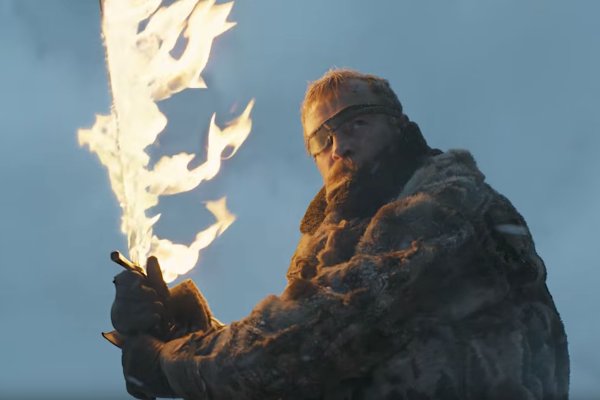 We Analyzed Every Second of the New Game of Thrones Season 7 Trailer
Next Up: Editor's Pick