Ideas
By Yuval Noah Harari
Noah Harari is a historian, philosopher and the bestselling author of Sapiens, Homo Deus and 21 Lessons for the 21st Century.

The last few decades have been the most peaceful era in human history. For the first time ever, fewer people die today from human violence than from traffic accidents, obesity or even suicide. Whereas in early agricultural societies human violence caused up to 15% of all human deaths, and in the twentieth century it caused 5%, today it is responsible for only about 1%. Yet the international climate is rapidly deteriorating; warmongering is back in vogue, and military expenditure is ballooning. Both laypeople and experts fear that just as in 1914 the murder of an Austrian archduke sparked the First World War, in 2017 some incident in the Syrian Desert or an unwise move in the Korean Peninsula might ignite a global conflict.

Yet there are several key differences between 2017 and 1914. Back then, war had great appeal to elites across the world because they had concrete examples for how successful wars contribute to economic success and political power. Now, successful wars seem to be an endangered species.

From the days of Assyria and Rome, great empires were usually built through war, and elites in 1914 had plenty of recent examples for the huge profits a successful war can bring. In 1846–48 the United States invaded Mexico, and for the price of 13,000 dead American soldiers, it got California, Nevada, Utah, Arizona, New Mexico and parts of Colorado, Kansas, Wyoming and Oklahoma. It was the bargain of the millennium. Similarly, imperial Japan cherished its victories over China and Russia; Germany glorified its triumph over France; and almost every great power had a string of splendid little colonial wars to its name. When France, Britain or Italy contemplated putting boots on the ground in Vietnam, Nigeria or Libya, their main fear was that somebody else might get there first.

In 2017, global elites don’t know what a successful war even looks like. They may have read about them in history books and seen fanciful recreations in Hollywood blockbusters, but they have good reason to suspect that this type of war has gone extinct. Though some third-world dictators and non-state actors still manage to flourish through war, it seems that major powers no longer know how to do so.

The greatest victory in living memory — of the United States over the Soviet Union — was achieved without any major military confrontation. The U.S. then got a fleeting taste of old-fashioned military glory in the First Gulf War — which only tempted it to waste trillions on humiliating military fiascos in Iraq and Afghanistan. China, the rising power of the early twenty-first century, has assiduously avoided all armed conflicts since its Vietnamese debacle of 1979, and it owes its ascent strictly to economic factors. In this, it has emulated not the Japanese and German empires of the pre-1914 era, but rather the nonviolent Japanese and German economic miracles of the post-1945 era.

Even in the Middle East, regional powers don’t know how to wage successful wars. Iran gained nothing from the long bloodbath of the Iran-Iraq War and subsequently avoided all direct military confrontations. It became regional hegemon by default, as its two main enemies — the U.S. and Iraq — got embroiled in a war that destroyed both Iraq and the American appetite for Middle Eastern quagmires.

Much the same can be said of Israel, which waged its last successful war fifty years ago. Since 1967, Israel has prospered despite its many wars, not thanks to them. Its conquered territories are a heavy economic burden and a crippling political liability. Like Iran, Israel has recently improved its geopolitical position not by waging successful wars, but by avoiding getting sucked into the wars that devastated Iraq, Syria and Libya.

The only recent successful war waged by a major power has been the Russian conquest of the Crimea. However, it was made possible by an extraordinary set of circumstances: The Ukrainian army showed no resistance; other powers refrained from intervening; and the Crimean population either supported the invaders or peacefully accepted the conquest as a fait accompli. These circumstances will be hard to reproduce. If the precondition for a successful war is the absence of any enemies willing to resist, it limits the available opportunities.

Indeed, when Russia sought to reproduce its Crimean success in other parts of the Ukraine, it encountered substantially stiffer opposition, and the war in eastern Ukraine bogged down into an unproductive stalemate. Conquering decrepit Soviet-era factories in Luhansk and Donetsk hardly pays for the war, and it certainly does not offset the costs of international sanctions.

The conquest of Crimea notwithstanding, it seems that in the twenty-first century the most successful strategy is to keep your peace and let others do the fighting for you. Why has it become so difficult for major powers to wage successful wars?

One reason is the change in the nature of the economy. In the past, if you defeated your enemy on the battlefield, you could easily cash in by looting enemy cities, selling enemy civilians in the slave markets and occupying valuable wheat fields and gold mines. Yet in the twenty-first century, only puny profits could be made that way. Today, the main economic assets consist of technical and institutional knowledge — and you cannot conquer knowledge through war. An organization such as ISIS may flourish by looting cities and oil wells in the Middle East — in 2014, ISIS seized more than $500 million from Iraqi banks and in 2015 made an additional $500 million from selling oil. But China and the U.S. are unlikely to start a war for a paltry billion. As for spending trillions of dollars on a war against the U.S., how could China repay these expenses and balance all the war damages and lost trade opportunities? Would the victorious People’s Liberation Army loot the riches of Silicon Valley? True, corporations such as Apple, Facebook and Google are worth hundreds of billions of dollars, but you cannot seize these fortunes by force. There are no silicon mines in Silicon Valley.

A successful war could theoretically still bring huge profits by enabling the victor to rearrange the global trade system in its favor, as the U.S. did after its victory over Hitler. However, present-day military technology would make it extremely difficult to repeat this feat. By definition, profits large enough to make a global war worthwhile for the victor will also make it worthwhile for the loser to resort to weapons of mass destruction. The atom bomb has turned “victory” in a World War into collective suicide. It is no coincidence that since Hiroshima superpowers never fought one another directly, and engaged only in what (for them) were low-stake conflicts in which none was tempted to use nuclear weapons to avert defeat. Indeed, even attacking a second-rate nuclear power such as Iran or North Korea is an extremely unattractive proposition.

Cyber warfare makes things even worse for would-be imperialists. As recently as the days of George W. Bush, the U.S. could wreak havoc in far-off Fallujah while the Iraqis had no means of retaliating against San Francisco. But if the U.S. now attacks a country possessing even moderate cyber warfare capabilities, malware and logic bombs could stop air traffic in Dallas, cause trains to collide in Philadelphia and bring down the electric grid in Michigan.

In the great age of conquerors, warfare was a low-damage, high-profit affair. At the battle of Hastings in 1066, William the Conqueror gained the whole of England in a single day for the cost of a few thousand dead. Nuclear weapons and cyber warfare, by contrast, are high-damage, low-profit technologies. You could use such tools to destroy entire countries, but not to build profitable empires.

Hence in a world filling up with saber-rattling and bad vibes, perhaps our best guarantee of peace is that major powers aren’t familiar with any recent example of a successful war. While Genghis Khan or Julius Caesar would invade a foreign country at the drop of a hat, present-day strongmen talk loud but are very careful about actually launching wars. Of course, if somebody does find a formula to wage successful wars under twenty-first-century conditions, the gates of hell might open with a rush. This is what makes the Russian success in the Crimea a particularly frightening omen. Let’s hope it remains an isolated example. Though, even if it is impossible to wage successful wars in the twenty-first century, that does not give us an absolute guarantee for peace. We should never underestimate human stupidity. 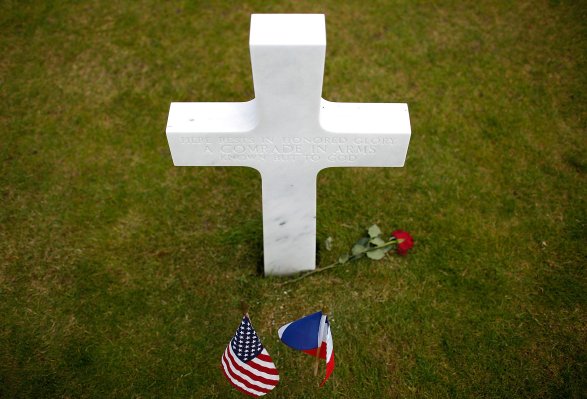 How to Talk About Enemies on Memorial Day
Next Up: Editor's Pick