How Strength Training Changes Your Body For Good

The following story is excerpted from TIME’s special edition, The Science of Exercise, which is available at Amazon.

Dr. Dena Oaklander, a psychiatry resident—who also happens to be my sister—is the last person you’d ever expect to become a bodybuilder. She’s naturally scrawny and a little bit shy, not the type of person to beast out at the gym—or so I once thought.

In medical school, she’d counsel patients on the importance of exercise and feel like a hypocrite, she says, since she did little but shuttle from home to the hospital, spending her rare free time catching up on sleep. “My body didn’t feel good, and my mind didn’t feel very good either,” she says. But once she started taking her own advice, as a resident at Loyola University Medical Center, Dena quickly became a hard-core strength-training fanatic. Within a month of learning how to lift weights, she noticed she had more energy without needing as much sleep, she felt far less stressed out, and she saw her body tone up fast.

“Strength training is the only way you’re going to truly be able to sculpt the physique of your personal dreams,” says Sue Clark, a Chicago-based strength coach who trains Dena. “Above and beyond the physical changes, though, a whole new persona emerges as people start to feel really confident in their own bodies.”

Clark saw the transformation in Dena, just as she has in many others. “Once I can get someone on board with strength training, they’re good for life, because they’re seeing results like they’ve never seen on cardio.”

The average American flat-out loathes strength training. While about half of people do the recommended amount of aerobic activity each week, only 20% also do the muscle-strengthening moves that work major muscle groups. Yet the scientific benefits are stacking up in favor of it, from bone protection to disease prevention, and it appears to have special benefits for women.

“There are so many misconceptions about strength and resistance training,” says Larry Tucker, a professor in exercise sciences at Brigham Young University. “One is that you’ll become muscle-bound”—so bulked up that your body becomes rigid. That myth was somewhat dispelled when athletes who started strength-training saw that they could hit a ball farther, jump higher and run faster, Tucker says. “Gradually we started realizing there are benefits beyond sports.”

But women in particular are neglecting strength training at their own peril. It’s the only kind of exercise that makes muscles bigger, which lets them generate more strength and force, faster. “Muscle mass allows us to move,” Tucker says. Young people tend to take for granted the day-to-day parts of life that require strength, like walking up stairs or picking up a baby. “But a sedentary lifestyle means that people are gradually becoming weaker over time,” he says. Building muscle can fight back against that process.

MORE: Why Weight Training Is Ridiculously Good For You

It’s also one of the very few ways to make bones denser, a perk that is especially important for women. Lifting something heavy, like a dumbbell, makes bones bear more weight, and in exercise, stressing your bones is a good thing (to a point of course). Bones are constantly remodeling, explains Anthony Hackney, an exercise physiologist at the University of North Carolina. “Your body is always adding calcium to your bones and taking calcium away from your bones,” he says.

This delicate balance starts to tip as people age, and “they lose more mineral from the bone than they’re able to lay down,” Hackney says. Over time, bone gets less dense and more brittle and prone to osteoporosis, a condition that affects about 10 million Americans—80% of whom are female. Women have smaller, thinner bones than men from the start, and after menopause they lose estrogen, a hormone that protects bones.

Strength training also comes with the less visible benefit of lowering risk for several diseases. “The only real way we can increase our metabolism, unless we take drugs, is to lift weights and maintain or increase our lean mass,” says Tucker. Doing so makes the body more sensitive to insulin, and therefore more durable against certain diseases.

Recent research suggests that strength training may lower a woman’s risk for Type 2 diabetes and cardiovascular disease. In a 2016 study, researchers from Harvard Medical School and the National Institutes of Health used data from nearly 36,000 older women, who ranged in age from 47 to 98. The women filled out questionnaires for about a decade detailing their health and exercise levels, and one question asked women to estimate how much weightlifting or strength training they had done per week in the past year. The researchers then tracked which of the women had a heart attack or stroke and which developed Type 2 diabetes.

Whether or not a woman did muscle-strengthening exercises indicated a lot about her health. Compared with women who avoided it, those who did any amount of strength training were more likely to have a lower body mass index and a healthier diet and less likely to be a current smoker.

They also had a Type 2 diabetes risk that was 30% lower and a cardiovascular disease risk 17% lower than those who did no strength training, even after the researchers controlled for other variables like age, diet and physical activity.

Adding aerobic exercise helped drive both risks down even more. Those who did at least 120 minutes a week of aerobic exercise and some strength training had a Type 2 diabetes risk 65% lower than women who didn’t do either.

Most people should do both kinds of exercise for the biggest gains. But if you had to choose one, Clark advises, pick strength training. “Cardio is more digestible, it’s less intimidating, but people also get less and less out of it over time,” she says. As you grow fitter, you have to do more and more aerobic exercise to see the gains, she explains. Strength training, in her view, is the most efficient exercise for those with limited time.

Powerlifting isn’t the only way to get results. Strength training comes in far more accessible forms as well—many of which do not even require a gym membership and certainly don’t require a personal trainer. Resistance bands, cheap strips of elastic that loop around arms or legs, are one good way to build strength without weights, for instance. A 2017 study showed that when frail women over 60 who were obese worked out with resistance bands for three months, they dropped body fat and increased bone density. Another option that involves even less equipment is to use your own body weight. Sitting up and down in a chair many times builds strength, as does jumping, which uses many of the legs’ major muscles. Even walking can count as strength training, depending on the intensity.

The right type and amount will be different for every woman (and man, for that matter), but a little bit every day will do wonders. Just ask Dena, who is planning to enter her first bodybuilding competition a year after picking up her first weight. “Not only do I look better than when I first started, but I also feel really confident,” she says. “Strength training opens up your thoughts for more positive thinking.”

Dena still urges her patients to exercise. But these days, it’s a prescription she really believes. Not everyone will become a bodybuilder, but most can get stronger and feel better by moving just a little bit more. “I find myself really encouraging patients to turn to exercise as an outlet or a way to help them cope with some of the difficult things they’re dealing with in life,” she says. “The message is different now, because I do it myself.” 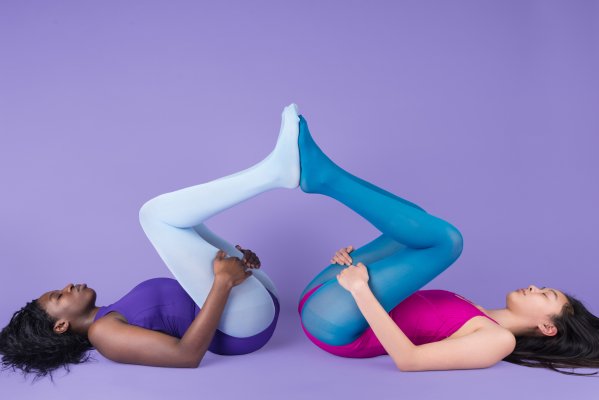 4 Weird Ways to Work Out
Next Up: Editor's Pick