By killing off 11 characters in its season six finale, Game of Thrones whittled down the number of cast members who still have the potential to impact the series’ outcome. And with several of these remaining players set to cross paths in the coming seven episodes, it’s likely there will be even fewer by the time season seven comes to an end.

However, this also means that fans might get to see characters who have never met — or have long been separated — finally interact with one another. Here are the 10 pairs we’d most like to see cross paths in season seven.

Once Dany finally reaches Westeros, it seems almost certain that the King in the North will seek her out. Maybe he’ll swing by her new home of Dragonstone to try and recruit the Dragon Queen and her fire-breathing companions to fight in the war against the White Walkers. Not to mention that the confirmation of the R+L=J theory makes Jon her only surviving relative. There’s even the possibility this meeting could lead to wedding bells.

MORE: This Game of Thrones Quiz Will Prove Whether You’re Ready for Season 7

Thanks to Bran’s trip back in time to the Tower of Joy, he is (possibly) the only person alive who knows the truth about Jon’s parentage — i.e., that Jon is not actually Ned Stark’s illegitimate son but rather the son of Ned’s sister Lyanna and Rhaegar Targaryen. Since Ned never got the opportunity to tell Jon about his mother like he promised he would, Bran filling Jon in on the details of his heritage seems like the next best thing.

The scene in which Jon gifts Arya with her trusty sword Needle is one of the few moments of Stark family happiness the show has allowed viewers to witness. And after the series of heartbreaking events that led to Arya being present at both Ned’s beheading and the Red Wedding, it seems like she’s at least entitled to a happy reunion with her favorite half-brother — er, cousin.

The Stark sisters may not have gotten along very well at the series’ start, but after everything their family has been through, it seems like they should be able to put aside their differences to team up against their real enemies. As their father — the honorable Ned Stark — once said, “the lone wolf dies but the pack survives.”

Although the Bear and the Maiden Fair have never actually said a word to each other, some fans are obsessed with the idea of a romance between them, even going so far as to preemptively nickname their coupledom “Torienne.” Luckily, there’s hope for these two crazy kids, as Dan Sackheim — the Thrones director who helmed the episode in which they first shared screen time — confirmed the tension between them was intentional.

It seems inevitable that the two most powerful women in Westeros will have to go head-to-head at some point. Get ready for a clash of the titans.

The apparent dual meaning of Gendry’s rejection of Arya’s plea for him to join her family — “You wouldn’t be my family, you’d be my lady” — made it so that much was left unresolved between the pair when Melisandre took Gendry away from the Brotherhood With Banners. Of course, Robert Baratheon’s illegitimate son hasn’t been seen since he rowed away from Dragonstone in the season three finale, so any reunion is dependent on him making a long-awaited reappearance.

Arya and the Hound

Arya left her kidnapper-turned-guardian — who once occupied a spot on her kill list — to die following his brutal showdown with Brienne in the season four finale. However, while training with the Waif at the House of Black and White, she admitted that she had no longer wanted him dead. Fortunately, the Hound managed to recover from his injuries and is currently traveling north with the Brotherhood Without Banners — a route that could put him on track to happen upon the young assassin once more.

The two Lannister brothers parted on a high note, with Jaime freeing Tyrion from his cell in the Red Keep’s dungeon so he could escape the death sentence leveled on him by their father. Of course, that was before Tyrion made a pit stop to murder Tywin on his way out of King’s Landing. Jaime has since declared that if he ever sees his younger brother again, he’ll “split him in two.”

Things are likely to get even more interesting when it comes to light that Tyrion is now the Hand of the Queen of Daenerys — the biggest threat to the Lannister reign.

The Hound and the Mountain 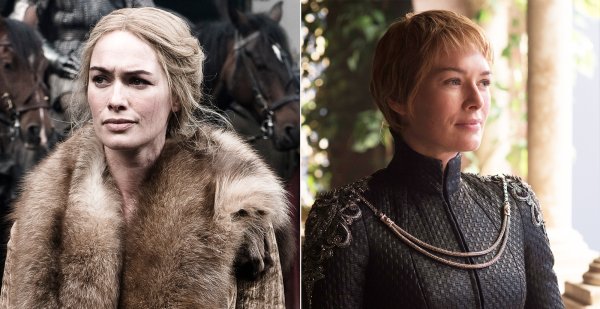 See How Cersei Lannister Has Changed Over Six Seasons of Game of Thrones
Next Up: Editor's Pick