An Immigration and Customs Enforcement (ICE) officer guards a group of immigrations at a facility in Raymondsville, Texas, in 2008.
JOSE CABEZAS—AFP/Getty Images
By Maya Rhodan

While the Trump Administration announced the official end of an Obama Administration effort to grant deportation reprieve to the parents of legal residents and American citizens, it left the future of another program that gave similar relief to immigrants brought to the country as children hanging in the balance.

The end of the Deferred Action for the Parents of Americans and Legal Permanent residents came after the Obama order faced a beating in the federal courts. Though it was signed in 2014, it was quickly blocked from taking affect and awaiting further litigation. But because President Trump disagreed with the policy, the Department of Homeland Security opted to formally rescind it.

The Department of Homeland Security indicated that the program protecting young migrants, or Deferred Action for Childhood Arrivals, would remain in effect in the initial announcement, but by early Friday a spokesman told the New York Times its ultimate fate remained unclear.

“There has been no final determination made about the DACA program, which the president has stressed needs to be handled with compassion and with heart,” a spokesman told the Times, adding that the Congress is the only body that can make a final decision on what to do with DACA recipients.

The back-and-forth did not instill confidence in advocates, most of whom are already skeptical of the Trump administration’s approach to the undocumented. “The only certainty in Trump’s America is uncertainty – and no memorandum changes that,” said Lorella Praeli, the director of immigration policy and campaigns at the American Civil Liberties Union.

As a candidate, Trump had promised end DACA, which he referred to as amnesty. After taking office, the president’s rhetoric shifted and he began to say he wanted to approach the issue facing dreamers, what young migrants are called, with “heart.” Between January and March 2017, U.S. Citizenship and Immigration Services reports about 125,000 DACA cases, both first-time applicants and those renewing the two-year deferrals, have been approved. Immigration hardliners have taken the administration’s inaction as a sign of betrayal.

Yet, while the Trump Administration has indicated that it wants to handle DACA recipients with care, there have been sporadic reports of dreamers facing arrest or having their protections revoked, feeding the widespread fear that has consumed immigrant communities in recent months. Ignacia Rodriguez of the National Immigration Law Center said in a statement that through the arrests of some Dreamers, the Administration had already broken its “promise to allow our undocumented youth to live and work without fear in the country they call home.”

Angelica Salas of the Coalition of Humane Immigrant Rights, or CHIRLA, said at the start of the Trump administration her organization opted to only help with renewals of DACA, rather than aide people through new applications out of concern that the program would be scrapped. Now, she says, she is helping parents and young people—you have to be at least 16—make a difficult choice.

Some families have opted out of applying, but the ones that do are provided legal counsel in case things don’t work out and have their applications meticulously reviewed to ensure there is as low a risk as possible. “These applications, initial applications, are squeaky clean,” she said.

“These are hard choices for them—do they remain undocumented, but do not provide additional information that could be used by the administration to then go after them, or do they apply under this program that they understand has always been temporary, but there is a different level or sense of protection for them?” Salas said. 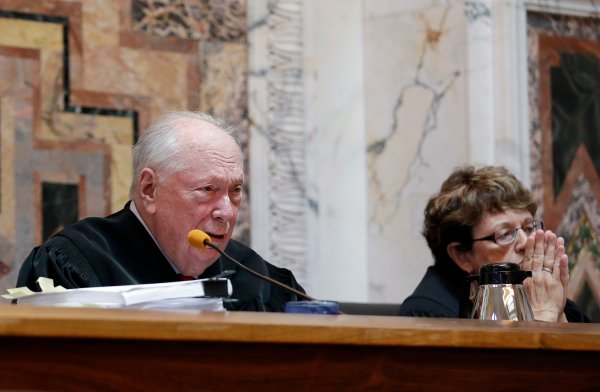 'Even the Good Hombres Are Not Safe:' Federal Judge Slams President Trump's Immigration Policy
Next Up: Editor's Pick