A Philippine politician said Thursday that people fleeing the besieged city of Marawi claim to have seen at least 100 corpses on their way out of the provincial capital that has been wracked by weeks of bloody battle.

Reuters reports that Zia Alonto Adiong, an official in Lanao del Sur province, told reporters that between 500 and 1,000 people are believed to still be trapped in Marawi, where government forces are fighting off militants who claim allegiance to the Islamic State group (ISIS).

“Dead bodies, at least 100, scattered around the encounter area,” Reuters quoted the official as saying. The Philippine military says at least 290 people — 206 militants, 58 soldiers and 26 residents — have died in the conflict so far, according to Reuters.

Reuters also reported Thursday that Mohammad Noaim Maute, a senior member of an eponymous gang involved in the Marawi conflict, was arrested Thursday in nearby Cagayan de Oro at daybreak by the Philippine military. The Maute group, led by two of Mohammad’s brothers, has reportedly pledged allegiance to ISIS.

Read More: Indonesia’s Military Chief Says ISIS Cells Are in ‘Almost Every Province’ of the Country

The militants took control of parts of the city late last month, triggering an effort by government security forces to retake control of the city, including with the use of airstrikes. U.S. spy planes and special operations forces have also been deployed to help Philippine forces battling Maute and Abu Sayyaf militants, according to the Associated Press.

Philippine President Rodrigo Duterte has reportedly not been seen in public since Sunday, Agence France-Presse reports, prompting concern about the 72-year-old leader’s health. The President’s spokesperson Ernesto Abello told reporters that Duterte was “just taking some time off to rejuvenate.”

Duterte declared martial law in Marawi and the greater Mindanao district at the outset of the conflict. He was last seen in public on a recent visit to Cagayan de Oro, where he was visiting soldiers who had been injured in the fighting, according to AFP. 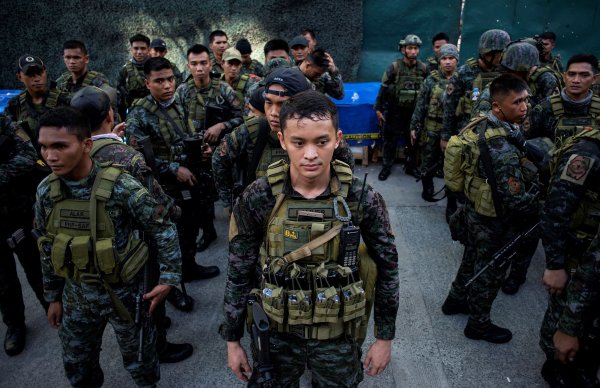 What to Know About the Manila Resorts World Attack
Next Up: Editor's Pick