'It Could Have Been Me.' Congressman Missed the Virginia Shooting by Minutes

UNITED STATES - MAY 4: Rep. Ryan Costello, R-Pa., leaves the Capitol after the House passed the Republicans' bill to repeal and replace the Affordable Care Act on May 4, 2017. (Photo By Tom Williams/CQ Roll Call)
Tom Williams—CQ-Roll Call,Inc.
By Ashley Hoffman

And Rep. Ryan Costello would have been there if he wasn’t running late.

The congressman was suited up in uniform ready to play, but he missed his ride to the field by exactly three minutes. “I would have been right there in the line of fire,” Costello told TIME in an interview.

That’s no metaphor. Costello plays shortstop for the team, which means if he was ready to ride on time, he would have been next to Scalise in between second and third base. “It would have been hard to miss me,” he said.

Costello’s ride leaves every practice day at 6 a.m. on the dot. When Costello couldn’t hitch another ride like he usually manages to, he decided to go to work. That’s where he found out what happened. The second he heard a TV reporter say the word “Congress” in front of a picture of the baseball field, he reached for his phone to give his wife and mother the same message: “I wasn’t there.”

“I did think it could have been me, but I tried not to say that too much because it’s selfish,” Costello said. “It’s about those five people.”

Costello said that Scalise is a natural leader who wants everyone to feel like they belong to the team, whether it’s the official business of Washington, basketball, or baseball, where the Whip is always pulling double plays in the annual charity game.

“We have a closer relationship because we practice baseball at 6:30 in the morning,” Costello said. “He busts my bells when I don’t make it to practice. He’s the first one to say ‘where were you?’”

Some officials have raised the issue of gun control in the wake of the shooting, but more than anything, Costello wants the five injured people to be safe.

“We’re not thinking about an agenda. These people have families who want to know if their dads are going to be OK,” he said.

“Hopefully it will lower the temperature in our country because this is very serious and very scary,” he said. “I have no idea if it will, but maybe people can reevaluate the source of their frustration with the country and realize something. We’re human beings. Democrats and Republicans all have families, so I want people to focus on that.” 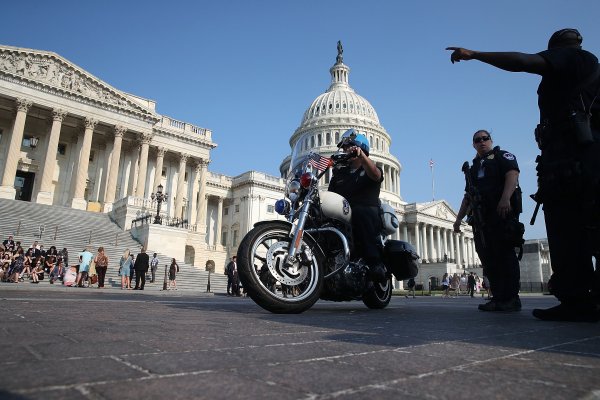 The History Behind the Founding of the U.S. Capitol Police
Next Up: Editor's Pick