Of Course Hillary Clinton Is a Wonder Woman Fan: 'Right Up My Alley'

Wonder Woman is unstoppable. Not only is the superhero movie breaking box office records, but it has some seriously high-profile fans willing to sing its praises. Exhibit A: Oprah. Exhibit B: Hillary Clinton.

During a video message shared at the Women in Film Crystal + Lucy Awards in Los Angeles on Tuesday, Clinton put her support behind the iconic superhero. And although she admitted she hasn’t yet had the chance to watch the film, that doesn’t mean she’s any less of a fan.

“No, I haven’t seen Wonder Woman yet, but I’m going to, in part because it’s directed by the fabulous Patty Jenkins,” Clinton said. “But something tells me that a movie about a strong, powerful woman fighting to save the world from a massive international disaster is right up my alley,” she continued, to general laughter. Her Wonder Woman homage was part of her message to actor, director and supporter Elizabeth Banks, who was receiving an award for Excellence in Film during the evening.

Michelle Obama and Senator Kamala Harris also sent in video messages to support award recipients Banks and Tracee Ellis Ross during the course of the evening. 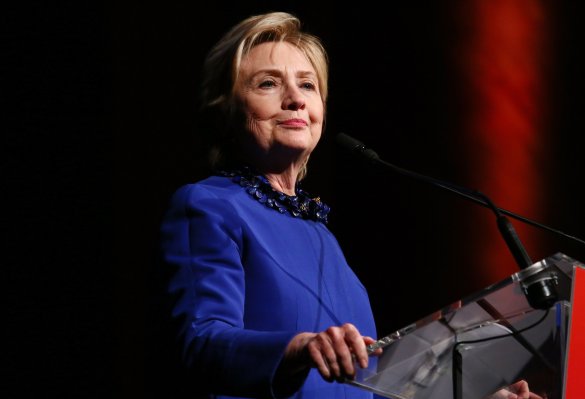 Clinton Goes Tweet-to-Tweet with Trump Over 'Covfefe'
Next Up: Editor's Pick