The FBI Evidence Response Team inspects the third base side of the baseball field in Alexandria, Va., June 14, 2017, where a rifle-wielding attacker opened fire on Republican lawmakers at a congressional baseball practice.
Cliff Owen—AP
By Melissa Chan

Gunman who shot GOP congressman was a ‘loner’

An Illinois man who shot a top Republican congressional leader and four other people at a congressional baseball practice in Virginia was a “loner” who had been apparently living out of a van for months in northern Virginia, authorities said. The 66-year-old suspect, James Hodgkinson, died of his injuries from a gun battle with police after wounding House Majority Whip Steve Scalise, a U.S. Capitol Police officer, a congressional staffer and a lobbyist. Scalise is in critical condition and needs more surgery, according to the hospital treating him.

President Donald Trump blasted a news report that said Special Counsel Robert Mueller is investigating the President for possible obstruction of justice in a pair of tweets Thursday morning. “They made up a phony collusion with the Russians story, found zero proof, so now they go for obstruction of justice on the phony story. Nice,” he wrote. “You are witnessing the single greatest WITCH HUNT in American political history – led by some very bad and conflicted people! #MAGA”

Casualties have been reported after a blast at a kindergarten entrance in China.

A UPS gunman filed an overtime grievance before fatally shooting three co-workers and then himself in San Francisco.

The Senate has approved sanctions against Russia for interfering in the 2016 U.S. presidential election.

The Federal Reserve has raised its benchmark interest rate for the third time in six months.

A man fell into a hot spring at Yellowstone National Park.

New Jersey’s Chris Christie is the most unpopular governor in 20 years, in any state, according to a new poll. 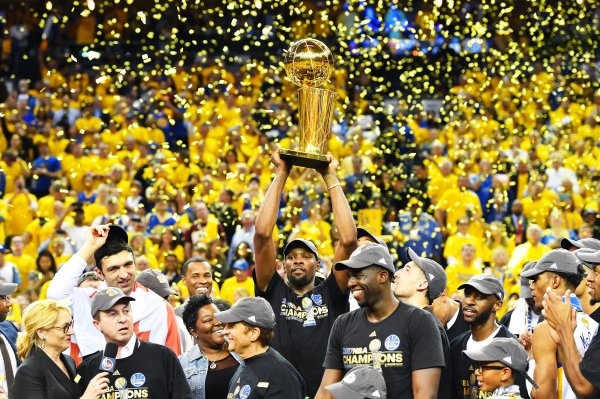 Jeff Sessions, Russia Protests, and the Warriors Win
Next Up: Editor's Pick