U.K. Election Delivers a 'Hung Parliament.' What Is That?

As final results were being counted, it has been confirmed that the U.K.voters have delivered a “hung” parliament, with the rule Conservative Party failing to win an outright majority.

The Conservatives, under the leadership of U.K. Prime Minister Theresa May, currently have a slim majority of 330 seats in Parliament. Its opposition, the Labour Party, holds 229 seats. An exit poll predicted the Conservatives would win a mere 316 seats in the general election, putting it 12 seats short of an overall majority.

What is a hung parliament?

Britain’s lower house of parliament, the House of Commons, has a total of 650 seats, which represents that many constituencies across the U.K. The Parliament is ‘hung’ when a general election does not result in a single political party winning a majority, which is 326 seats, in the House of Commons.

If the snap election leads to a hung parliament, the party with the most seats will either have to form a coalition or risk not passing any laws as a minority government. Either way, the largest party will not be able to pass laws without support from other parties: be it through a coalition or inter-party agreements.

When was the last hung parliament?

While it is a rarity in British politics, the last one happened not too long ago. The Conservatives, under the leadership of David Cameron, formed a coalition with the Liberal Democrats in 2010 as Cameron’s party were around 20 seats short of a majority. The coalition lasted for a five-year term till 2015.

What will happen if Tories become the largest party in a hung parliament?

The exit poll suggests the Tories could win 314 seats, Labour will win 266 seats, the Lib Dems at 14 and the Scottish national Party at 34.

As the largest party, the Conservatives could carry on in government with the help of the Ulster Unionists (DUP). This is because Labour, the Liberal Democrats, Greens and SNP have ruled out working in with the Tories. This scenario will crumble May’s authority and spoil her hand in the upcoming Brexit negotiations with the E.U.

However, the largest party does not have a privileged position. According to the Cabinet Manual— which is the closest thing to a rule book on these matters as Britain has no formal written constitution— the incumbent government “is expected to resign if it becomes clear that it is unlikely to be able to command that confidence and there is a clear alternative.” This means May has a real chance of being forced to resign if other parties can cobble together an anti-Conservative coalition.

Labour leader Jeremy Corbyn has ruled out a coalition with other liberal parties, in an apparent effort to distance the party from May’s claim that a vote for Labour would lead to a “coalition of chaos” with the SNP, Greens and Lib Dems.

If all options fail there will be a second election and the country will start the whole process again. 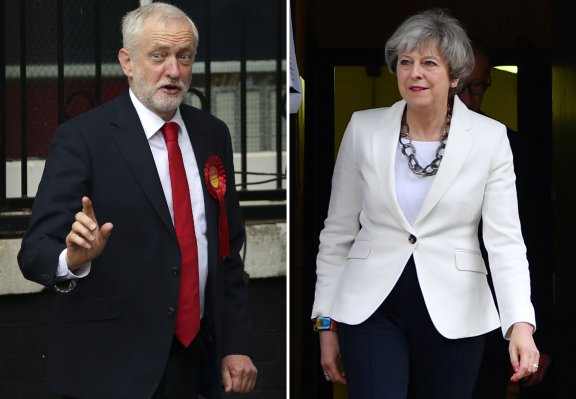 Hung Parliament Confirmed in U.K. Election
Next Up: Editor's Pick