How Donald Trump Could Become an Accidental Climate Hero

U.S. President Donald Trump announces his decision to pull the United States out of the Paris climate agreement in the Rose Garden at the White House June 1, 2017 in Washington, D.C.
Chip Somodevilla—Getty Images
Ideas
By Matti Rautkivi and Michael Levitin
Rautkivi, an engineer, is an energy analyst and the author of Goodbye to Deerland: Leading Your Utility Through the American Energy Transition; Levitin is a journalist who covers renewable energy and is the author of the forthcoming novel, Disposable Man.

President Donald Trump’s decision to withdraw the United States from the Paris climate treaty won’t stop the clean-energy revolution that is already replacing America’s dying coal industry. But what it could do, ironically, is set the stage for Trump to declare himself a “climate hero” once the economic effects of cheap renewables and gas become more deeply and widely felt.

How could that be?

As far as facts go, let’s state the obvious: Coal is never coming back. Ask any energy utility executive in America today, and they’ll tell you that the days of coal-based power are over — and that the time to invest in wind and solar is now. As I describe in our forthcoming book, Goodbye to Deerland: Leading Your Utility Through the American Energy Transition, to be published on June 13, electric utilities in conservative states like Texas and Oklahoma are at the epicenter of this great transition, where the shift from coal to renewables is already happening today.

Take wind, for example. In Texas, Oklahoma and Iowa, wind is now the cheapest source of energy — whether from renewables or fossil fuels. Texas has outdone every state, surpassing 20 gigawatts of installed wind capacity by the end of 2016 (a ten-fold increase since 2005), with 5.4 more gigawatts under construction. Wind power there already generates enough electricity to power 5.3 million homes, saving 28 million metric tons of CO2 emissions, or the equivalent of taking 6 million vehicles off the roads..

In economic terms, the Lone Star State has invested more than $32 billion on wind projects over the past decade, and it is paying off: The industry now employs upwards of 25,000 workers, with wind providing 12.7% of the state’s total energy production. According to Nathanael Greene, director of renewable energy policy at Natural Resources Defense Council, “I don’t think any state has been quite as fast at blowing past their [wind power] goals as Texas has.”

Why is this happening in a state famous for its love of oil and gas? Simple: The economics of wind are just too good to pass up for Texan ranchers and landowners, who are getting rich watching new turbines spring up across their state. Iowa to the north is no different. Ask Warren Buffett, whose MidAmerican Energy Company, a subsidiary of Berkshire Hathaway Energy, is busy building a $3.6 billion project known as Wind XI, installing 1,000 turbines to produce 2 gigawatts of electricity, enough to power 800,000 households. Thanks to Wind XI, Buffett’s company will supply 85% of its Iowa customers with wind power by 2020, shattering the future of coal in the state’s energy outlook.

In his annual investor letter to Berkshire Hathaway shareholders, Buffett wrote that federal tax credits and other government support for solar and wind could “erode the economics” of traditional utilities, which formerly ran as monopolies keeping energy prices fixed at their desired rates. Now, with increased competition from solar and wind, utilities that relied mainly on coal — and those that refuse to make the transition to renewables with gas — are seeing their end on the horizon.

Clearly, Trump doesn’t get his energy information from the same sources as Buffett, who in recent years has invested more than $16 billion in renewables nationwide and already owns 7% of America’s wind generation capacity, with 6% of its solar generation as well. But strangely, it’s possible both men made a gamble that will prove both of them right. Here’s why:

With every passing month, more coal plants across the nation are shutting down. According to Bloomberg New Energy Finance, 49 gigawatts of coal-fired power plants have already been disconnected in the past decade — 22 gigawatts in the last two years alone — and that trend will not reverse but only accelerate with time. The reason is basic economics: Not only are renewables cheap and getting cheaper, but low-cost and abundant natural gas have pushed down energy prices to the point that coal plants are hardly needed anymore. Throw in increased energy efficiency, and you have less power being produced, at a lower price than today, which equals bad prospects for coal.

This trend is self-reinforcing, because the more coal plants close, the faster America’s emissions will fall. Cheap gas will be used to supplement the greater use of renewables, and the clean-energy economy will boom like never before, translating into fewer emissions and lower costs for American consumers.

What does all this mean for the Paris treaty?

Trump knew his decision to withdraw the U.S. from the climate agreement would provoke global outrage, and it did. For Trump, the economy is the priority. But Trump’s promise to revive the coal industry isn’t going to happen; instead, the opposite will occur. And it’s safe to say that by 2020 — the earliest date that the U.S. can technically withdraw from the climate pact — Trump could point to his decision even as he points at all the shuttered coal plants, and say: “See, I told you we didn’t need the Paris deal. America’s emissions went down regardless, and our economy became stronger without it.”

Could all of this actually make Trump a “climate hero”? Stranger things have happened. At the end of the day, the clean-energy train isn’t stopping or slowing down. On the contrary, it’s speeding up, and with federal subsidies for renewables instituted under the Obama Administration in 2015 and slated to last through 2019, utilities are more eager than ever to invest in clean energy. For this reason, America’s abrupt pullout from the Paris climate accord may not end as badly as people fear. Who, in the end, takes credit for unleashing the giant economic wave from the renewables revolution is another matter. 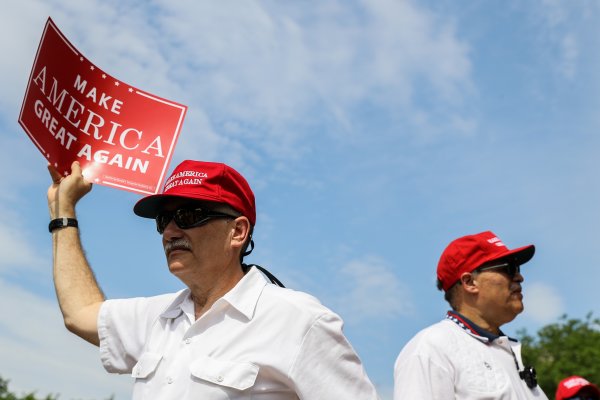 Donald Trump’s New Slogan Isn’t About the Climate. It’s About Gender
Next Up: Editor's Pick