Former FBI Director James Comey said at his congressional testimony Thursday that President Trump had “defamed” the FBI by saying in his letter announcing Comey’s termination that the public had lost confidence in the bureau.

“Those were lies, plain and simple,” Comey told the Senate Intelligence Committee in an open hearing Thursday. “The FBI is honest, the FBI is strong and the FBI is and always will be independent.”

This is the first time Comey has spoken publicly about his termination, which happened on May 9. He paid homage to his former colleagues, calling it the honor of his life.

His weariness of Trump consistently on truth also manifested itself when describing why he felt the need to document their interactions. Comey had confirmed in his prepared testimony that he had prepared memos after every conversation he had with Comey, a new practice he began for contact with President Trump, anticipating that he would one day need a record to defend himself and the FBI.

“It was a combination of circumstances public matter and a particular person,” he told the committee, acknowledging that he never felt this need when he served under presidents Obama and George W. Bush. “I was honestly concerned that he might lie.”

Comey had confirmed during a hearing before the House Intelligence Committee March 20 that the FBI was investigating the possibility of Russia interference in 2016 presidential election. Although President Trump had initially cited Comey’s handling of Hillary Clinton’s private email server during the campaign, but acknowledged two days later in an interview with NBC News’ Lester Holt that the Russia investigation was a factor.

“When I decided to just do it, I said to myself, I said you know, this Russia thing with Trump and Russia is a made up story. It’s an excuse by the Democrats for having lost an election that they should have won,” he told Holt.

President Trump’s decision to terminate Comey termination immediately invoked outrage on both sides of the aisle that he was firing someone heading a non-partisan investigation into whether his campaign colluded with Russia.

Comey, who will also testify before the committee in a closed hearing this afternoon said he was “confused” by Trump’s various explanations. 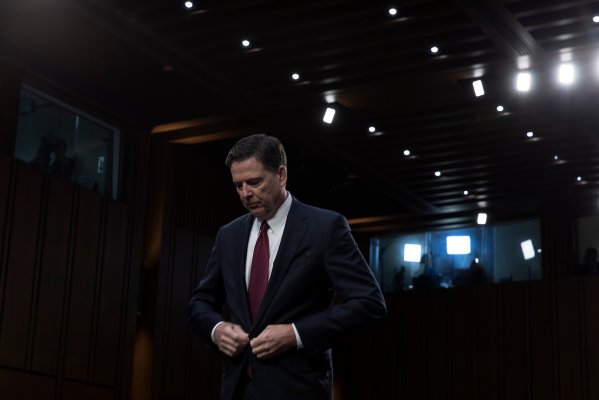 'Lies, Plain and Simple'
Next Up: Editor's Pick