London Mayor Sadiq Khan has suggested that U.S. President Donald Trump should not be welcomed to the U.K. because his policies are incompatible with British values, as a planned state visit approaches. The mayor’s comments follow criticism from Trump on Twitter over Khan’s response to a terror attack Saturday that left seven people dead in the British capital.

Speaking to Britain’s Channel 4 News on Monday, Khan said the U.S. President was wrong about “many things.” According to the Guardian, he added that he doesn’t think Trump should be welcomed to the country.

“I don’t think we should roll out the red carpet to the President of the U.S.A. in the circumstances where his policies go against everything we stand for,” he said.

President Trump criticized Khan on Sunday after the mayor told Londoners that an increased police presence on the streets was “no cause for alarm.” Trump misleadingly suggested that Khan was downplaying the act of terrorism, which saw a van crash into pedestrians on London Bridge before three men exited the vehicle and attacked several people in nearby Borough Market.

After the mayor’s office contextualized Khan’s remarks, Trump went on the offensive again, tweeting on Monday that the explanation was a “pathetic excuse.”

Trump’s attack on Khan has drawn sharp criticism not in the U.K. but also from American officials. The acting U.S. Ambassador in London, Lewis Lukens, issued a statement on Twitter offering praise and support for Khan: “I commend the strong leadership of the @MayorofLondon as he leads the city forward after this heinous attack,” it read.

The U.S. Conference of Mayors, which represents 1,400 communities across the country, also sent Khan an unequivocal message of support. 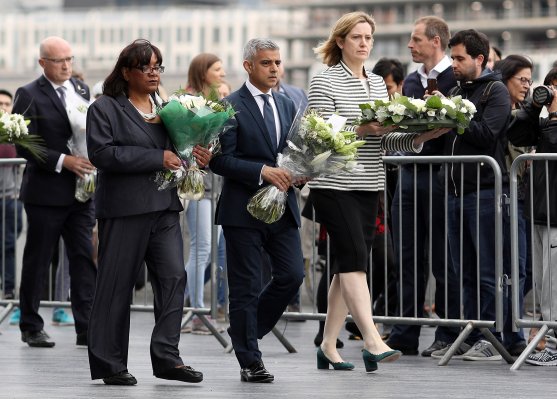 Londoners Remain Resolute at Vigil for Bridge Attack Victims
Next Up: Editor's Pick