A wounded man lies on the ground after a massive blast in Kabul on May 31, 2017.
Omar Sobhani—Reuters
By Andrew Katz

A massive truck bomb ripped through a section of central Kabul on May 31, killing at least 90 and injuring hundreds more in one of the conflict’s worst attacks. The crater left by the explosion, near the German embassy, was some 13 feet deep. Omar Sobhani, a Reuters photographer born and based in the capital, was quick to the scene. He tells TIME what happened.

My colleagues and I were on our way to work in the morning about two kilometers from the scene, when the explosion happened. Suddenly our car started shaking on the road as we were driving. At first we thought it was an earthquake but then immediately we knew it was a very big blast. We saw smoke rising in the sky and drove straight to the site of the explosion, where we saw a lot of people running past with bloodstains on their faces and bodies. My colleagues went on to the hospital and I ran towards the scene.

First, I made sure this wasn’t a group attack, with gunmen or another bomb following up the first explosion, but it was clear this was a big blast. When I got closer, I saw about 10 vehicles were damaged and there were fires in three different places. There was a cloud of smoke everywhere. It was very confusing scene.

I have covered many explosions before but the scope of this one was too big. I heard three or four voices calling for help but I couldn’t see them because of the smoke. I found myself facing an injured man on the ground and took a couple of pictures. He started asking for help and I tried to help him. Security forces arrived and pushed me back from the scene and I saw them put him in an ambulance to take him to the hospital.

This is not the first time this has happened and there is no sign of an end to the violence. People’s morale has certainly been destroyed. People are tired of violence and conflict. They just want peace but I think the situation is growing worse day by day. 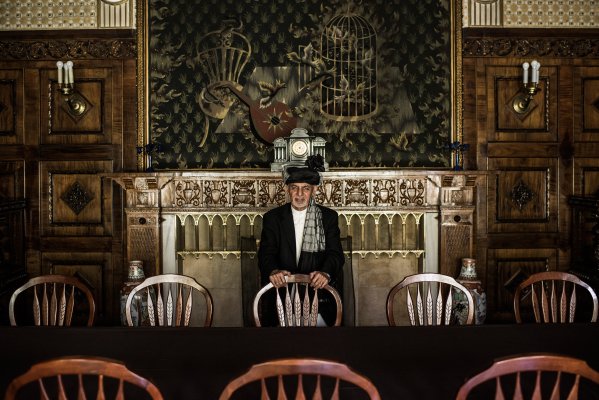 'This Is the Front Line': Afghanistan's President Talks to TIME
Next Up: Editor's Pick