But rather than clashes over how to challenge ISIS and awkward accusations by Trump that 23 of the 28 NATO members were freeloaders not paying their fair share for military protection, what really captivated the world was the footage of awkward body language between the U.S. President and various world leaders.

TIME spoke to India Ford, a London-based internationally renowned body language expert and the founder of Talkbodylanguage, to find out what it all meant.

Trump appeared to push Prime Minister Dusko Markovic of Montenegro, the country set to become NATO’s 29th member on June 5, out of the way at a photocall of world leaders.

White House spokesman Sean Spicer told reporters that the positions for the photo that the world leaders were preparing for were predetermined and Trump was merely heading for the spot reserved for him. Markovic did not seem to take any offense. “It’s only natural for the president of the United States to be in the front row,” he said in a statement on the government website, Bloomberg reports.

India Ford: “When I saw this I couldn’t stop laughing. I’m just absolutely astonished by it. It is such an aggressive, bullying gesture by Trump and I think it displays his very high sense of entitlement. He’s saying ‘Do you know who I am?’. After the shove – which is the kind of behavior you would expect to see a five-year-old display in the playground – he immediately goes into his go-to pose, where he pushes his head back and juts his chin out. That’s a very arrogant pose to be in as it means you’re looking down at people.

In any situation where Trump feels mildly threatened, he goes into that pose – it’s clearly something he’s done his entire life. After standing in that arrogant position, he then displays a very vulnerable pose; he goes into the fig leaf. You only really get into the fig leaf pose – where you cover a very vulnerable part of the body – when you start to feel vulnerable. So it’s possible the woman he was talking to said something negative to him – maybe it was something about his shoving! He looks like a kid being told off.”

Macron’s swerve away from Trump

Footage showed the newly elected French President walking up a red carpet towards a group of NATO leaders then swerving at the last second to greet Merkel instead of Trump, leaving the U.S. president looking awkward with his hands hovering over his pockets. Macron tweeted the video from his official account, with the caption: “In Brussels, united with our NATO allies.”

Right after Macron’s swerve, Trump and the French leader shared a painful-looking handshake that just went on… and on.

“What Trump is doing here is showing Macron who’s boss. It’s another aggressive move by Trump; he’s pulling Macron towards his own face and he’s basically saying ‘you will come to me, whether you like it or not.’ You can see Macron trying to get away from the situation – he puts his arms on Trump to stop him pulling him inwards. This handshake makes sense when you see the previous video. Trump’s done this because of what Macron’s just done. It’s as though he’s saying ‘Do you know who I am? You will not be doing that again.'”

If the first handshake wasn’t awkward enough, the pair locked hands for so long that their knuckles started turning white during another exchange. When Trump finally seemed ready to pull away, Macron held the shake for a few seconds more. Both men’s jaws seemed to clench, the Associated Press reported at the time. 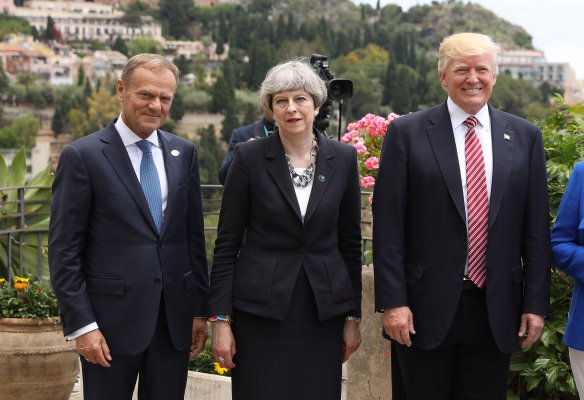 Watch Live: British Prime Minister Theresa May Speaks at the G7 Summit
Next Up: Editor's Pick