How Your Favorite British Celebrities are Voting in the U.K.'s General Election

Brits are heading to the ballot box on June 8, little more than two years after the Conservative Party won a majority in the country’s last general election. The center-right party, led by Prime Minister Theresa May initially looked on course for a landslide victory – but over the ensuing weeks the gap between the Tories and Jeremy Corbyn’s Labour Party has narrowed.

As the results feel so uncertain, TIME has taken a look at the views of its favorite British celebrities to help predict the outcome of Thursday’s vote. Spoiler alert: it looks an overwhelming victory may be ahead – but it’s not for the candidate the pollsters are expecting. Here’s what the stars are saying:

The renowned British actor waded into U.K. politics in mid-May when he urged voters to back the Labour Party’s candidate Wes Streeting on June 8.

Speaking in a video message posted on the Ilford Recorder‘s website, the much-loved Lord of the Rings star said he did not normally get involved in politics, but described casting a vote as “a wonderful feeling”.

He added: “If you take my advice, consider Wes Streeting as Member of Parliament for Ilford North. We need him back in Parliament because he is one of the great young politicians: everything before him, but his principles firmly in place. Like me, like you, he believes in equality and young people and has got a passion for education and opportunities for young people too.”

The former One Direction bandmate hinted at his political allegiance for the first time when he told the Sunday Times Magazine that he was “probably going to vote for whoever is against Brexit.”

Style added: “I’m not educated enough on the subject to really go toe-to-toe with someone about it, but disregarding the economic stuff and all of that, I think what it symbolises is the opposite of the world I would like to be in. I think the world should be more about being together and being better together and joining together, and I think it’s the opposite of that.”

It is likely that 23-year-old – quickly dubbed a ‘remoaner’ by Britain’s right-wing tabloids – is voting for the centrist Liberal Democrats, the major party that is the most consistently opposed to Brexit. Shortly after Styles’ Sunday Times interview was published, the party put out a press release, titled ‘“Like your styles,” Harry should vote Lib Dem.’

Even the Lib Dem leader Tim Farron jumped on the Harry Styles bandwagon. “Harry is right, the only direction the government are going in is the wrong one. It is making people feel that it is dragging them down,” he said, The Mirror reported. “So my message to Harry is this – one thing that makes the Liberal Democrats different is giving the people a say and a vote on the final deal.”

‘Smile’ singer Lily Allen has been a loud and proud Labour supporter ever since she posted a photo of herself outside a polling station with the caption “Come on the reds!” in 2010.

When Allen was lambasted by the press for apologizing to a teenage refugee in Calais “on behalf of my country” last year, Labour leader Jeremy Corbyn stuck up for her on social media, tweeting: “I admire [Lily Allen] for showing Britain at its best: compassionate, welcoming, and standing up to fear and division.”

Since the snap election was announced, Allen has been doing the same for Corbyn, retweeting news of him doing well in the polls and his messages urging people to vote, while at the same time making her feelings about Theresa May clear.

The Four Lions, The Night Of and Girls star, whose image was on one of four TIME 100 covers earlier this year, has not directly endorsed the Labour party. However, a quick scroll down Ahmed’s Twitter timeline will reveal a number of positive tweets and retweets concerning Corbyn – and the same definitely can’t be said for May.

Ahmed even retweeted a video in which Corbyn urged young people to register to vote, as well as an article written by the hip-hop artist Akala, called ‘By choice, I’ve never voted before. But Jeremy Corbyn has changed my mind.’

J.K. Rowling is a staunch Labour supporter, but she’s made her thoughts on Corbyn pretty clear. However, although she’s no fan of Labour’s leader, she’s still likely to vote for Britain’s left-wing party – if this cryptic tweet is anything to go by:

Despite signalling that he voted to leave the E.U. in last year’s referendum, Monty Python star John Cleese has said he is supporting the Lib Dems and Labour (both pro-Remain parties), although he won’t be going to the polls on June 8 because his constituency is among the most pro-Conservative in the nation.

The charismatic British actor appeared to be for the Liberal Democrats, as he spoke in support of the party at an event Monday evening. That said, he was described on the event’s press release as “not party-political,” so he could still be supporting another group.

Could it be Corbyn, Actually? The Bridget Jones star has shown inclinations to vote for the party on social media and on Tuesday he took to the streets to “support / destroy” the chances of his “chum” Paul Dadge, a prospective Labour parliamentary candidate.

Rory Graham AKA Rag ‘n’ Bone Man AKA the man who created the song ‘Human’ which has been in your head since its release last year, is a big Corbynite (so much so he’s been there, done that and got the t-shirt. See below).

The British rapper and singer-songwriter is another fan of Corbyn (in a recent tweet she described him as “the Princess Diana of British politics”). On May 21, the 41-year-old, who contributed songs for the score of the award-winning movie Slumdog Millionaire, revealed that she registered to vote for the first time in her life. “Never believed in politicx [sic],” she wrote. “But 2017 doin it for the first and only time.”

In 2013, the comedian attracted ire during an interview by claiming he had never voted, and never would. But the Forgetting Sarah Marshall star has clearly had a change of heart. In a Huffington Post opinion piece published May 31, Brand threw his weight behind – you guessed it – Corbyn.

“Jeremy Corbyn has somehow been in politics for decades with his integrity perfectly preserved, like his much derided beard has functioned as hairy formaldehyde for his principles,” he wrote.

Brand added: “Electing the Tories for another five years, to throw the opportunity for change into the distant indeterminate wasteland of 2022 would be an act of collective self-loathing bordering on mass sadomasochism.”

What do you mean you’ve never heard of him? The British stand-up comic is the only celebrity TIME could find who is pledging his allegiance to May’s Conservative Party. An active Brexit supporter, Jim Davidson’s Twitter feed includes retweets from the right-wing Leave.EU account, former UKIP party leader Nigel Farage and the Conservative Party’s official page.

In fact, Davidson is so committed to the Tories that he’s even been out campaigning for them:

Of course, some American celebrities are also weighing on how they would vote, if they had one — either because they’re Anglophiles, or more likely, Corbynphiles:

The Catastrophe star and Twitter aficionado Rob Delaney is definitely an honorary Brit, and he’s ‘voting’ for the Labour Party.

On June 6, Lena Dunham advised her British fans to opt for Labour leader Jeremy Corbyn. In a Instagram post, the Girls writer, director and star said that despite her U.S. passport, she “desperately urge[s]” her U.K. “friends/fans/frenemies” to vote for the Labour Party.

“With Jeremy Corbyn you have a chance at a fair and just leader who will temper the fascism and darkness of our current American moment,” she added.

Despite also being a U.S. citizen, Matilda actor Danny DeVito has not steered away from giving his two cents on the U.K. election. Clearly for DeVito (and the vast majority of the celebrities above), there’s only one option: Labour.

But will the British public feel the same way? 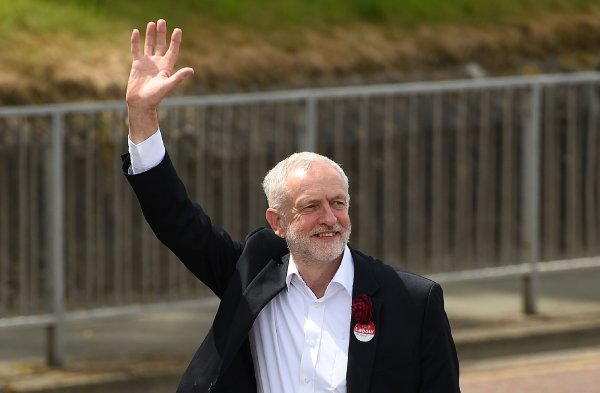 How Labour's Jeremy Corbyn Can Win by Losing the U.K. Election
Next Up: Editor's Pick