Politicians and musicians have expressed their horror following news that an explosion killed at least 19 at an Ariana Grande concert Monday night in Manchester, U.K., posting messages of condolence on Twitter.

“My heart goes out to families who have lost loved ones, my admiration to our brave emergency services,” tweeted Greater Manchester mayor Andy Burnham.

He also tweeted out the hashtag #RoomForManchester, directing people stranded as a result of the attack to areas “where hotels and local people of our great city are offering refuge.” There is also a hashtag #MissinginManchester for people yet to be located.

“My thoughts are with all those affected and our brilliant emergency services,” tweeted oppostion Labour Party leader Jeremy Corbyn. Tim Farron, leader of the Liberal Democrats, sent his “deepest condolences to the victims and families in Manchester.”

“Canadians are shocked by the news of the horrific attack in Manchester tonight,” tweeted Justin Trudeau, Canada’s Prime Minister. “Please keep the victims and their families in your thoughts,” he added.

“Thinking of every family whose lives have been destroyed today by a cowardly hate filled attack,” tweeted Brendan Cox, widower of the murdered British MP Jo Cox. “So much pain and so pointless.”

British musicians, many of them from Manchester, have also sent messages of shock and support as the U.K. wakes up to the morning after the bombing.

Liam Gallagher of Oasis tweeted that he was “in total shock and absolutely devastated about what’s gone down,” and sends “love and light” to the families involved. The Rolling Stones, meanwhile, “are deeply shocked to hear of the appalling events” and “send condolences to everyone affected by this tragedy.” Queen, the band, has also sent “their heartfelt condolences” to people affected by the “shocking events in Manchester late last night.”

“Manchester stands together,” wrote Johnny Marr, the guitarist of rock band The Smiths.

Harry Styles said he was “heartbroken over what happened in Manchester tonight.” His One Direction bandmate Niall Horan, meanwhile, called the event “absolutely horrendous.”

“My thoughts are with the great people of Manchester and also Ari and her team,” Horan added.

“To see what has happened in Manchester makes me really sad,” tweeted Liam Payne, another One Direction member, while Louis Tomlinson said that Monday night’s events were “so upsetting.”

“Can’t find words to express my horror,” tweeted Brian Cox, a University of Manchester physicist also known for hosting science programs for the BBC. “My thoughts are with everyone caught up in this atrocity.”

Manchester City and Manchester United, the two Premier League soccer clubs in the Greater Manchester area, have also expressed their sorrow and shock on Twitter.

Players for both Greater Manchester clubs have tweeted their thoughts and condolences in the wake of the bombing, while former Manchester United player Cristiano Ronaldo tweeted a picture of a Union Jack with the word “Manchester” across the middle.

Rihanna, who performed in Manchester in 2016, said she was “devastated” by Monday night’s attack. “These are innocent vulnerable kids, this could’ve been any of us” she wrote.

American director Ava DuVernay conveyed her sadness on Twitter, calling it a violation of “a place to trust.”

Expressing his shock with colorful language, actor Idris Elba tweets that his “heart goes out to the families of those who lost their lives.” His tweet ended with a thumbs-down emoji and a defiant “No.”

Law enforcement are treating the blast as “a terrorist incident,” according to a statement from the Greater Manchester Police. The 23-year-old Grande “is O.K.,” her publicist Joseph Carozza told the New York Times. 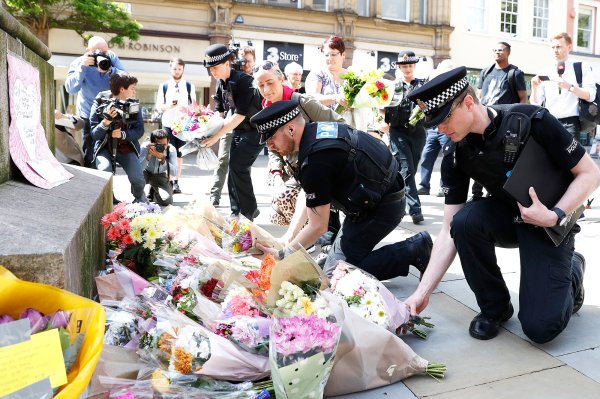 Britain in Mourning
Next Up: Editor's Pick