We have reached the singularity of peak food trends: the avolatte exists. It’s a latte served inside a (mostly) scooped-out avocado skin and topped off with an artful froth design, of course, and it was pioneered by an Australian café that actually intended to make a satirical point by doubling down on the two millennial-favorite foods. But people are buying in — and shaking their heads.

Talk of expensive avocado toast and lattes has been all the rage in Australia lately, following a searing op-ed in which a millionaire called out millennials for spending too much money on the trendy chow. So as a joke, one Melbourne café posted a video of the creation of a latte inside the hollowed-out rind of an avocado. “Combing [sic] two of Melbourne’s obsessions,” the caption read, adding on a crying-laughing emoji for good measure. But it appealed to customers, and they’ve actually sold a handful.

“It’s literally coffee in a piece of rubbish,” a barista who helped kicked off the viral excitement told an Australian news outlet. And yet. Between turmeric, ginger, bulletproof, and matcha lattes, is it much of a stretch to imagine the heart-healthy avocado becoming another flavor option for ever-popular coffee drinks? (Maybe just served in something more convenient than the avocado skin.) At least it’s a step up from the radioactive-looking Unicorn Frappuccino,

Then again, Merriam Webster has weighed in, and is decidedly not going to be jumping on this bandwagon. Check out some of the other reactions below. 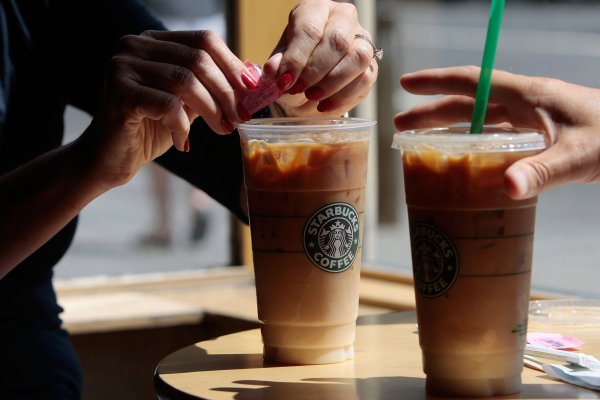 Starbucks' Coffee Ice Cubes Are Here to Save Iced Coffee
Next Up: Editor's Pick