I Tried To Find the Perfect Selfie Drone

Yuneec
By John Patrick Pullen
Each product we feature has been independently selected and reviewed by our editorial team. If you make a purchase using the links included, we may earn commission.

There’s nothing more annoying than a dad with a camera. I know this not only because I’m a father with a smartphone always one swipe away from a photo shoot, but because my old man documented much of my 1980’s — for better or worse — with a shoulder-mounted camcorder. But later in life, when you can finally appreciate these treasured memories, you realize somebody’s always missing from these photos: The person behind the camera.

After some failed launch attempts, a new gadget has finally arrived to make sure everybody gets in the frame: Selfie drones. Small, camera-equipped drones typically controlled with a smartphone app, they’re like selfie sticks on steroids.

I tried two models: the Rova, a $299 quadcopter with a 12-megapixel camera, and the $399 Yuneec Breeze 4K, a 13-megapixel drone capable of shooting in ultra-high definition. My plan was to set up the drones and take some shots of my family as we sat on the couch in the living room — pretty straightforward stuff. If everything went well, I could envision having photos of birthday parties, game nights, and so on like I had a personal photographer documenting our every afternoon.

I began by unpacking the Rova. About the size of a dinner plate, the 8×8-inch quadcopter is bigger than I expected, although it’s by no means large by drone standards. But my fantasy of packing the wife and kids onto the couch for a quick photo shoot was dead as soon as I removed the drone from its carrying case. Covered by a skeleton that keeps the Rova’s rotors from scratching up walls or other objects, the drone also comes with four foam protective bumpers, two eight-minute batteries, and a 16 gigabyte microSD card for capturing your photos or videos.

Thinking better of making my first test flight indoors, I fired up the Rova outside. I’m glad I did. The drone had no problem connecting to my iPhone via Wi-Fi, but the app’s on-screen controls weren’t as intuitive as others I’ve piloted in the past. I didn’t immediately recognize the take off/landing icon on my iPhone’s screen, which resulted in some initial out-of-control flying as I button-mashed, trying to get the Rova up and under control.

With options for obstacle avoidance, orientation flipping, and a selfie/drone mode in addition to the standard flight controls, there’s a lot going on with this flight system. As a result, the Rova initially shot up about six feet and then spun around like a disco ball. That’s not the kind of drone behavior you want to see in your house. Eventually, I got it flying properly and snapped photos and videos like a pro. But my confidence was shot when the Rova’s app unexpectedly crashed — and then so did my drone, directly into the side of my house like a hapless airborne paparazzo.

Bracing myself for more of the worst, I turned to the Yuneec Breeze 4K. The white, exposed-blade quadcopter had a much more involved setup than the Rova, requiring calibration and firmware updates (which, incidentally, failed.) Connecting to Wi-Fi was also a little finicky at first, but once the link was made, everything performed as advertised. Offering a range of camera modes—like selfie, orbit, and journey—the Breeze lives up to its name, hovering in place and snapping away on command.

The Yuneec’s photos downloaded automatically to my smartphone’s photo library (Rova offers this too, or you can store them on the airborne microSD card), and they came out crisp and colorful. I’d put the quality of the shots around the same level as my iPhone 6S, though it’s certainly easier to use the manual controls for the camera than for flying. That said, the Breeze’s flight controls were very good, and the drone quickly hovered at the appropriate height for a good selfie.

But just like no Indiana Jones movie ever won a Best Picture award, neither will the Breeze. In the words of Indy himself: “Fly? Yes. Land? No.” With an auto-landing function, you’d expect the Breeze to touch down quickly and easily. But pressing this button can send your drone on a wild ride. I tried it several times — before and after adjusting the drone’s height- and distance-limiting controls — and each time, the Breeze shot up more than 50 feet in the air and then slowly floated to the ground. I imagine that with some practice and further fine-tuning of the drone’s controls this surprising ascent could be stopped.

But these selfie drones are only the beginning for casual drone photographers — more will undoubtedly hit the skies soon. DJI’s just-announced Spark drone could be a great selfie drone, for example. While the Rova and Breeze were fun for a few flights, I’m not sure I’ve found an airborne camera crew for my family’s adventures yet. Still, I did discover the one thing more annoying than a dad with a camera: A dad with a camera drone. 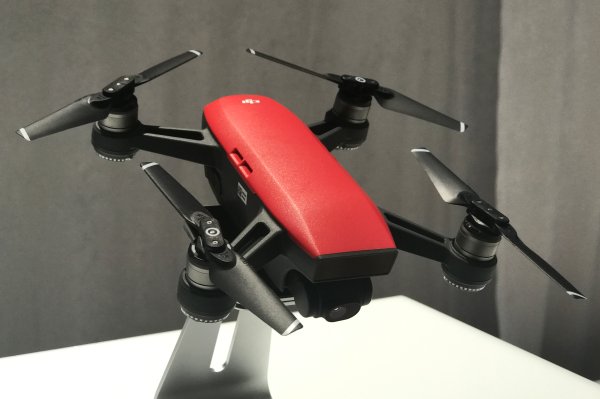 The DJI Spark Is The First Drone I Actually Want To Buy
Next Up: Editor's Pick