DJI on Wednesday unveiled the Spark drone, the smallest model the popular Chinese dronemaker has released to date.

A first for DJI, the Spark can be controlled entirely through hand gestures for quick airborne selfies. Piloting it with an accompanying app allows for a broader array of maneuvers, including flight patterns like “Helix,” which mimics Hollywood-style action movie helicopter shots. An optional remote control adds further control options and dramatically increases the range.

Like other recent DJI drones, the Spark is capable of detecting and avoiding objects in its flight path. When it comes time to land, tapping the Spark’s “Return to Home” button brings the aircraft back to its departure point.

The Spark’s camera can shoot 12 megapixel photos and record 1080p high-def videos. That’s roughly equivalent to a typical smartphone, but it’s not as good as DJI’s higher-end drones, which can shoot ultra-high-def 4K footage. The Spark also has a “ShallowFocus” setting that blurs out the backgrounds behind your subjects, similar to the iPhone 7 Plus’ Portrait Mode.

DJI claims the Spark has up to 16 minutes of battery life. It’s rechargeable via MicroUSB, meaning you’ll be able to top it off in the field with a portable charger, provided it’s big enough.

The Spark is compatible with DJI’s Goggles headwear for flying with a first-person view from the aircraft.

The Spark is available for pre-order starting immediately; shipments will begin in mid-June. It will cost $499 for the basic package, while a more extensive bundle with a second battery, remote, bag and other extras will go for $699.

I haven’t had the chance to fly the Spark yet, but the specs are certainly promising. I’ve avoided buying a drone so far because they’re either too big and cumbersome, too expensive, or from some no-name brand. But the Spark might hit the sweet spot, offering a portable design for half the cost of DJI’s high-end Mavic Pro from a company that’s widely considered the best in the biz. 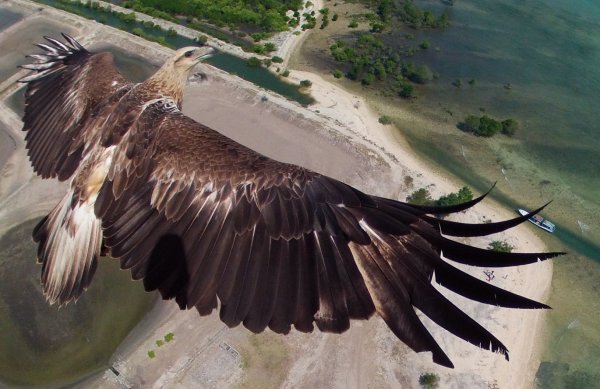 This New Book Showcases the World's Best Drone Photography
Next Up: Editor's Pick