The weapons sale was one of the largest in history, totaling close to $110 billion worth of tanks, artillery, radar systems, armored personnel carriers, and Blackhawk helicopters. The package also included ships, patrol boats, Patriot missiles, and THAAD missile defense systems.

Much of that military hardware will likely be pressed into service in the Saudi fight against its neighbor Yemen, where more than 10,000 people have been killed over more than two years of heavy airstrikes and fighting.

This puts the U.S. in a precarious ethical position, say human rights groups and former U.S. officials. The Saudi-led airstrike campaign has hit numerous schools, hospitals, factories, and other civilian targets, leading to well-documented allegations of war crimes by human rights organizations. The war has also pushed much of the country to the brink of starvation, with more than 17 million people facing famine, according to the U.N.

“There’s a humanitarian aspect that tends to be ignored. This is something that will come back to bite the Saudis as well, and by implication the Americans, because we’re the ones providing the bombs and bullets,” says Robert Jordan, the former U.S. ambassador to Saudi Arabia appointed by George W. Bush.

“The implication is not necessarily that these are war crimes, but it is a stain on the reputation of both the Saudis and potentially the Americans to continue this kind of bloodshed with indiscriminate attacks on civilian populations,” he tells TIME in a phone interview.

Far from Washington and the ever-expanding investigation into Trump’s relations with Russia, the president trumpeted the weapons deal as a step that will boost Saudi security and the American economy. The agreement was exactly the sort of decisive, business-oriented deal on which Trump bases his personal brand. But in this case, the deal also further entangles the United States in a political and humanitarian crisis that threatens to spiral out of control.

Saudi Arabia, the UAE, and a coalition of predominantly Arab states launched a military intervention in Yemen in 2015 in order to drive back Houthi rebels who seized the capital and forced the recognized government to flee. Saudi officials say the campaign is also intended to combat the expanding influence of Iran, which they accuse of supporting the rebels. The Houthis, representing a Zaydi-Shiite minority concentrated in Yemen’s north, are also allied with the forces of Yemen’s former president Ali Abdullah Saleh, who was forced out following mass protests during the region-wide Arab uprisings of 2011.

Under the Obama administration, the United States supported the bombing campaign from the beginning, including providing tanker aircraft to refuel Saudi coalition jets in midair. As civilian deaths mounted, Obama scaled back support in 2016, halting the sale of cluster bombs and also halting a $400 million transfer of precision guided missiles, citing what one U.S. official called “systemic, endemic” problems with how the Saudi military chose targets in Yemen.

Rights advocates criticized Obama’s decision to stop the deliveries of some weapons as an inadequate gesture. But Trump’s surge in weapons dispenses with any pretense of American disapproval for the conduct of the campaign in Yemen.

Trump also mentioned the Saudi offensive in a major speech he gave to regional heads of state in Riyadh on Sunday, counting it as an important effort to combat terrorist groups. Yet international observers say the war has created a power vacuum in which extremist groups like ISIS and al-Qaeda have flourished. “This deal has President Trump throwing gasoline on a house fire and locking the door on his way out,” Amnesty International’s USA branch said of the deal in a statement.

Speaking alongside U.S. Secretary of State Rex Tillerson in Riyadh on Saturday, Saudi Foreign Minister Adel al-Jubeir said that some accusations against Saudi Arabia and the coalition had been false. “We have made mistakes and we have acknowledged those and we have investigated those,” he said. “The perception is that this was an aggressive war. It was not. People forget how this started,” he also said.

The Saudi-led military coalition has also imposed an air and sea blockade on Yemen, a restriction that the U.N. says is one of the main causes of the food crisis in the country. Their opponents, the Houthi and pro-Saleh forces, have also restricted the flow of aid. According to International Crisis Group, both sides are “pursuing war by any means with little to no regard for the population.”

Saudi leaders have acknowledged the limits of military action in Yemen. In an interview with al-Arabiya television on May 2, Saudi Arabia’s Defense Minister, Deputy Crown Prince Mohammed bin Salman ruled out an escalation of the war. If the Saudi coalition were to intensify the campaign, he said, “There will be funerals in all Saudi cities. Yemeni civilians will also fall victims.”

Two former U.S. officials said they expected Trump or his team to urge Saudi officials to pursue a political solution to the conflict in Yemen. The Saudi government, for its part appears to have stalled, if not set aside, a previously-announced plan to seize the Yemeni Red Sea port of Hodeida, a step that could have deepened the humanitarian crisis. U.S. officials hope the change of plans could foreshadow a broader effort at a political solution.

“It’s cost them a huge amount in terms of human losses, financial losses,” Gerald Feierstein, a former U.S. ambassador to Yemen under President Obama, told TIME. “I don’t have any reason to believe the Saudis want this thing to go on any longer than it has.” 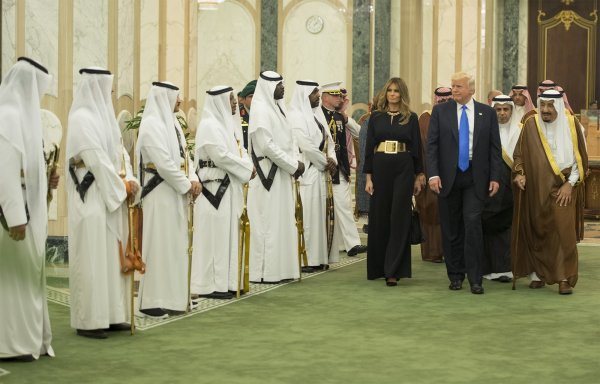