Leave it to Solange Knowles to make one of the world’s most famous art museums her own personal space for an intimate performance with a powerful message. “An Ode To,” performed on May 18, is an interdisciplinary performance art project inspired by her album A Seat at the Table and created in collaboration with the Guggenheim Museum and the Red Bull Music Academy Festival. During the performance, the “Cranes in the Sky” singer commanded a rapt audience, which willingly submitted to a suggested dress code and a mandatory cell phone check-in. The show skewed more towards a Sunday morning in church than a typical concert — that is, if the church were a sanctuary dedicated to soulful music and black womanhood, led by the high priestess Solange.

Below, we’ve rounded up everything you need to know about the moving and mysterious performance:

It was held at the Guggenheim in New York City, a space Solange selected specifically.

Solange made good use of Frank Lloyd Wright’s stunning architecture in the Solomon R. Guggenheim museum’s famous rotunda by using the open format of the different floors as a part of her show. Throughout the performance, she and her dancers and musicians walked down the circular ramps leading to the first four floors of the museum. At one point, her horn players played from three different levels, projecting into the rotunda.

Solange also used the location of the Guggenheim to make a point about the spaces that she and people of color have occupied, and continue to occupy, when it comes to art, using the light of the rotunda as a jumping-off point.

“Hold your communities tight. That’s why I’m here,” she said. “I care about seeing your faces in this light. I don’t care much about the institutions. I care about having the show to see the faces that I wrote this album for.”

Guests were encouraged to participate in a specific dress code.

Before the performance, bypassers saw long lines of guests clad in all-white ensembles, all at the behest of Solange. Once inside the museum, the all-white dress code complemented the white walls of the Guggenheim Rotunda, as well as the all-white stage set-up designed by Solange.

Solange, her band and her dancers also adhered to a similar, minimalist dress code.

While not all in white, Solange and her band wore variations on retro sweatsuits in warm tones like burgundy, burnt orange and ochre. Dancers wore simple white sweatsuits, matching the walls of the Guggenheim and the audience. All of the performers went barefoot.

In an age defined by “doing it for the ‘Gram,” all attendees were required to check in their phones and cameras, ensuring that guests enjoyed the performance in the present, outside of a phone screen or camera lens attempting to capture the moment. The lack of phones also meant that the performance wasn’t documented and spread on social media in the way that many contemporary concerts often are. For now, fans will have to be satisfied with footage from the rehearsals that Solange shared on her Instagram.

The audience ranged from civilians to celebrities.

While guests listened from all parts of the museum — sitting cross-legged on the floor and standing on the open floors of Guggenheim’s rotunda — some of Solange’s fans were decidedly famous. Questlove, Zoe Kravitz, Bjork and DeRay Mckesson were all in attendance.

The performance confirmed the range of Solange’s creativity.

Solange has been defined on terms beyond being Beyoncé’s little sister for quite some time now, but this performance showed that she’s crossing and combining genres in a way that most artists wouldn’t dare. The program for the performance credits Solange as the choreographer, musical director and composer of the event and also describes it as a “movement, installation, and experimentation with reconstructed musical arrangement, composed and conceptualized by Solange.” After the performance, she thanked the audience for “allowing me the space to grow and evolve and explore new mediums with my choreography and arrangement in a space like this.”

She sang a selection of songs from A Seat at the Table but didn’t stick to the script.

Solange’s set list included multiple songs from A Seat at the Table, including “Cranes in the Sky,” “FUBU” and “Mad.” But she also used her performance as a way to expand upon her recorded songs, walking up to a security guard during “FUBU” and singing directly to him and turning a note from “Mad” into a scream. She also used her choreography as a way to explore the physical space of the Guggenheim; at one point, she threw herself onto the ground, and at another, she twerked against a wall.

She stayed true to the message of “FUBU.”

One of the most powerful moments in the performance was when Solange sang “FUBU,” which stands for “for us, by us.” As she sang, she moved into the crowd and sang the penultimate phrase of the song — “this sh-t is for us” — to black audience members, while kneeling down and dancing with them. After the performance, she emphasized the importance of choosing to hold the show in the Guggenheim, reaffirming that people of color, and especially women, belong in these spaces.

“I’m not settling for being allowed in these spaces but for tearing these f—king walls down,” she said. “Inclusion is not enough. Allowance is not enough. We belong here. We built this sh-t.” 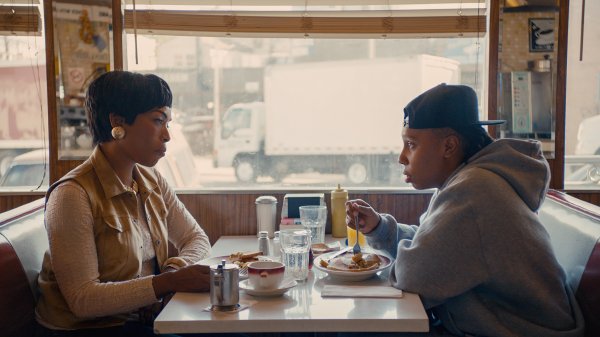 How That Master of None Thanksgiving Episode Came to Be
Next Up: Editor's Pick