By Robert A. Barnett / Health.com

You’re anxious, worried, freaked. You’re upset about (pick one): money, health, work, family, love. Your heart is beating fast, your breathing is shallow and rapid, your mind is imagining doom, and you wish you could just relax…now! Whether you have a full-blown anxiety disorder or are just freaking out, you may not want to try medication—at least not yet.

There are many safe non-drug remedies for anxiety, from mind-body techniques to supplements to calming teas. Some start working right away, while others may help lessen anxiety over time.

If you have a jittery moment, a cuppa chamomile tea might help calm you down. Some compounds in chamomile (Matricaria recutita) bind to the same brain receptors as drugs like Valium.

You can also take it as a supplement, typically standardized to contain 1.2% apigenin (an active ingredient), along with dried chamomile flowers. In onestudy at the University of Pennsylvania Medical Center, in Philadelphia, patients with generalized anxiety disorder (GAD) who took chamomile supplements for eight weeks had a significant decrease in anxiety symptoms compared to patients taking placebo.

They say Japanese Buddhist monks could meditate for hours, both alert and relaxed. One reason may have been an amino acid in their green tea called L-theanine, says Mark Blumenthal, of the American Botanical Council.

Research shows that L-theanine helps curb a rising heart rate and blood pressure, and a few small human studies have found that it reduces anxiety. In one study, anxiety-prone subjects were calmer and more focused during a test if they took 200 milligrams of L-theanine beforehand.

You can get that much L-theanine from green tea, but you’ll have to drink many cups—as few as five, as many as 20.

Yes, it’s in beer, but you won’t get the tranquilizing benefits of the bitter herb hops (Humulus lupulus) from a brew. The sedative compound in hops is a volatile oil, so you get it in extracts and tinctures—and as aromatherapy in hops pillows.

“It’s very bitter, so you don’t see it in tea much, unless combined with chamomile or mint,” says Blumenthal. Hops is often used as a sedative, to promote sleep, often with another herb, valerian. Note: Don’t take sedative herbs if you are taking a prescription tranquilizer or sedative, and let your doctor know any supplements you are taking.

Some herbal supplements reduce anxiety without making you sleepy (such as L-theanine), while others are sedatives. Valerian (Valeriana officinalis) is squarely in the second category. It is a sleep aid, for insomnia. It contains sedative compounds; the German government has approved it as a treatment for sleep problems.

Valerian smells kind of nasty, so most people take it as a capsule or tincture, rather than a tea. If you want to try it, take it in the evening—not before you go to work! Valerian is often combined with other sedative herbs such as hops, chamomile, and lemon balm.

Read More: 13 Things People With Anxiety Want You to Know

Named after the Greek word for “honey bee,” lemon balm (Melissa officinalis), has been used at least since the Middle Ages to reduce stress and anxiety, and help with sleep. In one study of healthy volunteers, those who took standardized lemon balm extracts (600 mg) were more calm and alert than those who took a placebo.

While it’s generally safe, be aware that some studies have found that taking too much can actually make you more anxious. So follow directions and start with the smallest dose. Lemon balm is sold as a tea, capsule, and tincture. It’s often combined with other calming herbs such as hops, chamomile, and valerian.

Exercise is safe, good for the brain, and a powerful antidote to depression and anxiety, both immediately and in the long term. “If you exercise on a regular basis, you’ll have more self-esteem and feel healthier,” says Drew Ramsey, MD, Assistant Clinical Professor of Psychiatry at New York-Presbyterian Hospital, Columbia University, who blogs at www.DrewRamseyMD.com.

“One of the major causes of anxiety is worrying about illness and health, and that dissipates when you are fit.”

Twenty-one minutes: That’s about how long it takes for exercise to reliably reduce anxiety, studies show, give or take a minute. “If you’re really anxious and you hop on a treadmill, you will feel more calm after the workout,” Dr. Ramsey says.

“I generally ask my patients to spend 20 to 30 minutes in an activity that gets their heart rate up, whether it’s a treadmill or elliptical or stair stepping—anything you like. If you rowed in college, get back to rowing. If you don’t exercise, start taking brisk walks.”

In spite of the name, this herb won’t help you in love. It’s a sedative; the German government has approved it for nervous restlessness. Some studies find that it can reduce symptoms of anxiety as effectively as prescription drugs. It’s often used for insomnia.

Like other sedatives, it can cause sleepiness and drowsiness, so don’t take it—or valerian, hops, kava, lemon balm, or other sedative herbs—when you are also taking a prescription sedative.

Be careful about using more than one sedative herb at a time, and don’t take passionflower for longer than one month at a time.

Read More: 11 People on How They Deal With Anxiety

The intoxicating (but safe) aroma of lavender (Lavandula hybrida) may be an “emotional” anti-inflammatory. In one study, Greek dental patients were less anxious if the waiting room was scented with lavender oil. In a Floridastudy, students who inhaled lavender oil scent before an exam has less anxiety—although some students said it made their minds “fuzzy” during the test.

In one German study, a specially formulated lavender pill (not available in the U.S.) was shown to reduce anxiety symptoms in people with Generalized Anxiety Disorder (GAD) as effectively as lorazepam (brand name: Ativan), an anti-anxiety medication in the same class as Valium.

Ok, let it out now. We’re not recommending that you turn blue, but yoga breathing has been shown to be effective in lowering stress and anxiety. In his bestselling 2011 book Spontaneous Happiness, Andrew Weil, MD, introduced a classic yoga breathing technique he calls the4-7-8 breath. 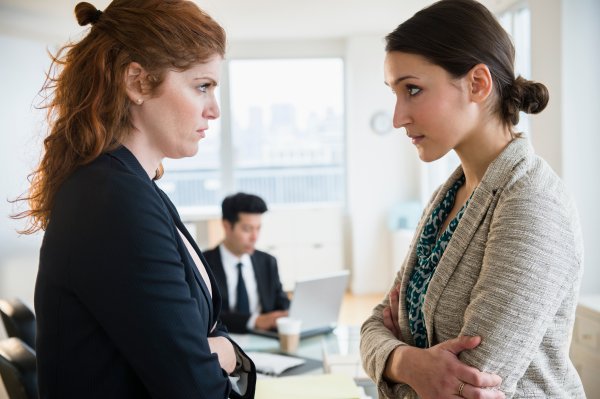 How to Respectfully Disagree With Your Boss
Next Up: Editor's Pick