Roger Ailes, the onetime political operative who went on to build Fox News into a cable television powerhouse before being ousted amid numerous accusations of sexual harassment, has died. He was 77 years old, and his death was confirmed Thursday morning in a statement by his wife Elizabeth to Drudge Report.

“I am profoundly sad and heartbroken to report that my husband, Roger Ailes, passed away this morning,” Elizabeth Ailes said in the statement. “Roger was a loving husband to me, to his son Zachary, and a loyal friend to many.”

“He was also a patriot, profoundly grateful to live in a country that gave him so much opportunity to work hard, to rise — and to give back,” she added. “During a career that stretched over more than five decades, his work in entertainment, in politics, and in news affected the lives of many millions. And so even as we mourn his death, we celebrate his life…”

The cause of death has not been announced. A Palm Beach police report said Ailes suffered a head injury from a fall that left him seriously bleeding eight days before he died, the AP reports.

Known for building the Fox News empire, Ailes came under fire in recent years following a number of sexual harassment allegations. He left the network in disgrace last year. Since his ouster, Fox News was hit with a number of lawsuits, and the company also jettisoned its top host Bill O’Reilly after several women also accused him of sexual harassment.

Hired by Rupert Murdoch, Ailes founded Fox News in 1996, advertising it as a “fair and balanced” alternative to its cable competitors. The network went on to become a large influencer in politics, particularly in the Republican party. Fox News is now the highest-rated cable news network in the country.

An Ohio native, Ailes began his career in television with The Mike Douglas Show in Cleveland. It was there he met former President Richard Nixon — then a presidential candidate — who he later served as a media consultant for and helped win the White House.

“For 200 years the newspaper front page dominated public thinking. In the last 20 years that picture has changed,” Ailes wrote in the memo, according to the book The Information Diet. “Today television news is watched more often than people read newspapers, than people listen to radio, than people read or gather any other form of communication. The reason: people are lazy. With television you just sit – watch – listen. The thinking is done for you.”

Ailes, a Republican, also worked on several other campaigns, including that of former President Ronald Reagan, where his focus was on promoting his vice presidential candidate George H.W. Bush.

Most recently, Ailes advised President Donald Trump ahead of the 2016 general election, in which Trump defeated Democratic challenger Hillary Clinton. 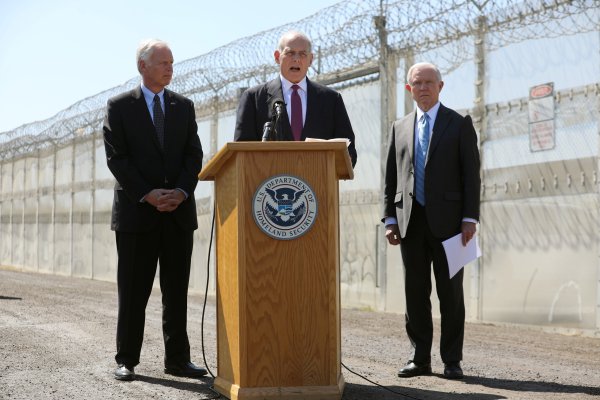 Sentencing Reversal Angers Both Sides
Next Up: Editor's Pick