18 Sitting Senators Were in Office During Bill Clinton's Impeachment. Here's How They Voted

As talk of impeachment began in the Capitol this week, some in Congress may be experiencing déjà vu.

Eighteen current senators—11 Republicans and seven Democrats—were also in the upper chamber during the impeachment of former President Bill Clinton in 1999.

“Nowhere in the Constitution or in the expressed views of our founders are crimes intended to conceal the President’s character flaws distinguished from crimes intended to subvert democracy,” Arizona Sen. John McCain said at the time, according to a copy of his statement posted on CNN.” The President thwarted justice.”

In light of a bombshell report in the New York Times that President Trump asked FBI Director James Comey to drop an investigation into his National Security Advisor, one House Democrat called for impeachment on the House floor, while others have called for an independent commission to look into the issue.

Along with McCain, Collins and Shelby, the Republicans were now-Senate Majority Leader Mitch McConnell of Kentucky and Sens. Mike Crapo of Idaho, Chuck Grassley of Iowa, Pat Roberts of Kansas, Thad Cochran of Mississippi, Jim Inhofe of Oklahoma, Orrin Hatch of Utah and Mike Enzi of Wyoming.

In addition, one of the House impeachment managers was now Sen. Lindsey Graham of South Carolina, while Attorney General Jeff Sessions, who also voted to find Clinton guilty on both counts, also served in the Senate in 1999.

Correction: An earlier version of this story incorrectly stated the number of sitting senators who voted on Bill Clinton’s impeachment. It is 18, not 17. 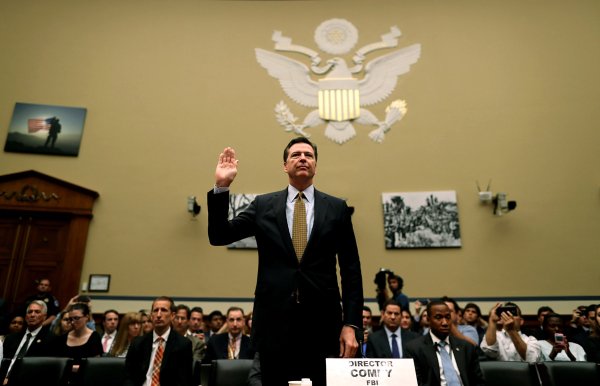 Senate Committee Asks Comey to Testify
Next Up: Editor's Pick