6 Ways to Have More Intense Orgasms

Everyone loves a happy ending—so why stop at just one? In our exclusive Health.com orgasm survey, three-quarters of you said you want more: more frequent O’s, stronger O’s, and yes, O’s in a row!

Gird your loins, ladies: We’ve got tips from top ecstasy experts on how to achieve ultimate bedroom bliss.

Take it to the brink

To make your orgasm …
Last longer

Unlike men, women can maintain a heightened level of arousal, without going over the edge.

To take advantage, “Practice something called ‘peaking’ where, using his hands or his mouth during foreplay, your man brings you just to the edge of climax, backs down a bit, then increases the intensity again, and so on,” says Ian Kerner, PhD, sex therapist and founder of GoodinBed.com. “It keeps you in this holding pattern of orgasmic pleasure.”

Think about what happens when you climax: Does your body clench? Do you hold your breath? Sure, all of that tension may help you reach orgasm, but once you get there, it’s holding you back.

“If you allow the sensations to take over your entire body, rather than react against them, you can draw the orgasm out,” says sexologist Yvonne K. Fulbright, PhD.

To make your orgasm …
Feel stronger

“Fantasizing about something new or exotic during foreplay boosts your dopamine levels, which enhance your level of arousal, and in turn, make your orgasms even more powerful,” Kerner says.

Pretend you and your man are on the beach in Belize, or having sex where the neighbors might see. The fantasy will eventually slip away, but that heightened level of excitement will lead to a more intense peak.

Women have a little-known pleasure point that, when triggered during orgasm, can magnify the sensation.

Right above your clitoral hood, in the groove where your labia meet, is the front commissure, an area rife with nerve endings that contributes to your orgasmic potential, Kerner says.

If you or your partner applies pressure there while you’re in that blissed-out moment, it can create an even more powerful release.

Order up an appetizer and an entree

To make your orgasm …
Happen again and again (and again)

Hey, a girl can be greedy! Your best bet is to try to achieve one during foreplay, followed by another during intercourse.

“If you’ve reached orgasm before sex, you’ll be that much more primed to have a second one,” Fulbright explains. “During sex, he’ll be stimulating you internally as well, so the next one can be a deeper sensation.”

Your buzzy buddy can make a second (or third!) happy ending happen a helluva lot easier with your partner. If your guy is up for it, you can use it during intercourse, while in girl-on-top position. Or ask him to use it on you as a post-show treat. 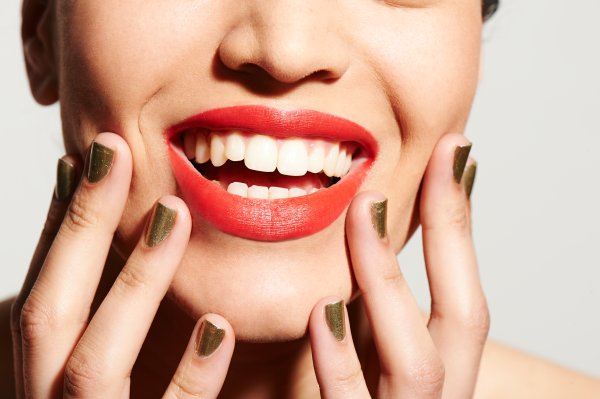 10 Easy Ways To Become a Happier Person
Next Up: Editor's Pick